So some new renders were released for the arena. I neither love it nor hate it, I like the plentiful windows and all the Flames decorations. The red highlights help a lot too. In the picture on the left, that roof just feels like it extends way too far outwards for me.

Just a little thing, but this design doesn't seem to be overly tall either. That doesn't bug me from a design sense, but that would likely mean most of the actual arena is underground. Might that be a problem if the city ever floods again?

I like this "Inverted Bowl" concept, as seen in the bottom right picture, where instead of getting further and further from the ice the higher up you go, the upper bowl is basically a series of levels right on top of each other. This could make the arena feel a lot more intimate, and bring everyone close to the action. I wonder though, if that sacrifices capacity? The Saddledome is one of the bigger arenas in the NHL, in one of the smaller markets, and yet it always seems to be quite full. If they cut back capacity in this new arena from 19.3k in the 'Dome to, say, 18k, that'll make for a surge in ticket prices. You can't even go to a game in Winnipeg for under $70/seat most of the time, I'd hate to see that here.

There's a lot of towers I've never seen before in the top right picture, I wonder if they just plopped those there to make it look good, or if those are all part of the plan.

Nice to finally see some traction on this. Was just thinking about how shocked I am that the city/stampede board still has not released a design or plan for the grade crossing of 17th Avenue into Stampede Park, and then thought "oh, I have no idea where I'd even post that!" So voila, a relevant thread for such discussions. Given that the Entertainment District and Stampede Park revitalization combined will be the next great district redevelopments in the city and will be ongoing for a long time, it makes sense to have a thread.

The Daily Hive just posted a decent article the other day about the entertainment district, including population projections and a neat map.

"On the heels of the collapse of the Calgary 2026 bid and the continued uncertainty of the future of the CalgaryNEXT proposal, one city councillor has outlined his vision of transforming the area in and around the Stampede Grounds – East Victoria Park – in downtown into a vibrant cultural and entertainment district.

Ward 6 city councillor Jeff Davidson is part of a municipal committee that has led the charge for a possible new arena that could become the new home of the city’s NHL team.

In a blog post this week, he says a new arena built in the area would anchor the new district, which would have four million-sq-ft of mixed-use development, including homes for 8,000 people to create a vibrant community.

Beyond just sporting and entertainment venues, there will be a diverse variety of shops and restaurants to create a vibrant, lively district year-round – not just for “episodic events,” namely the Calgary Stampede. Along with renderings of the new Calgary Arena and Events Centre... 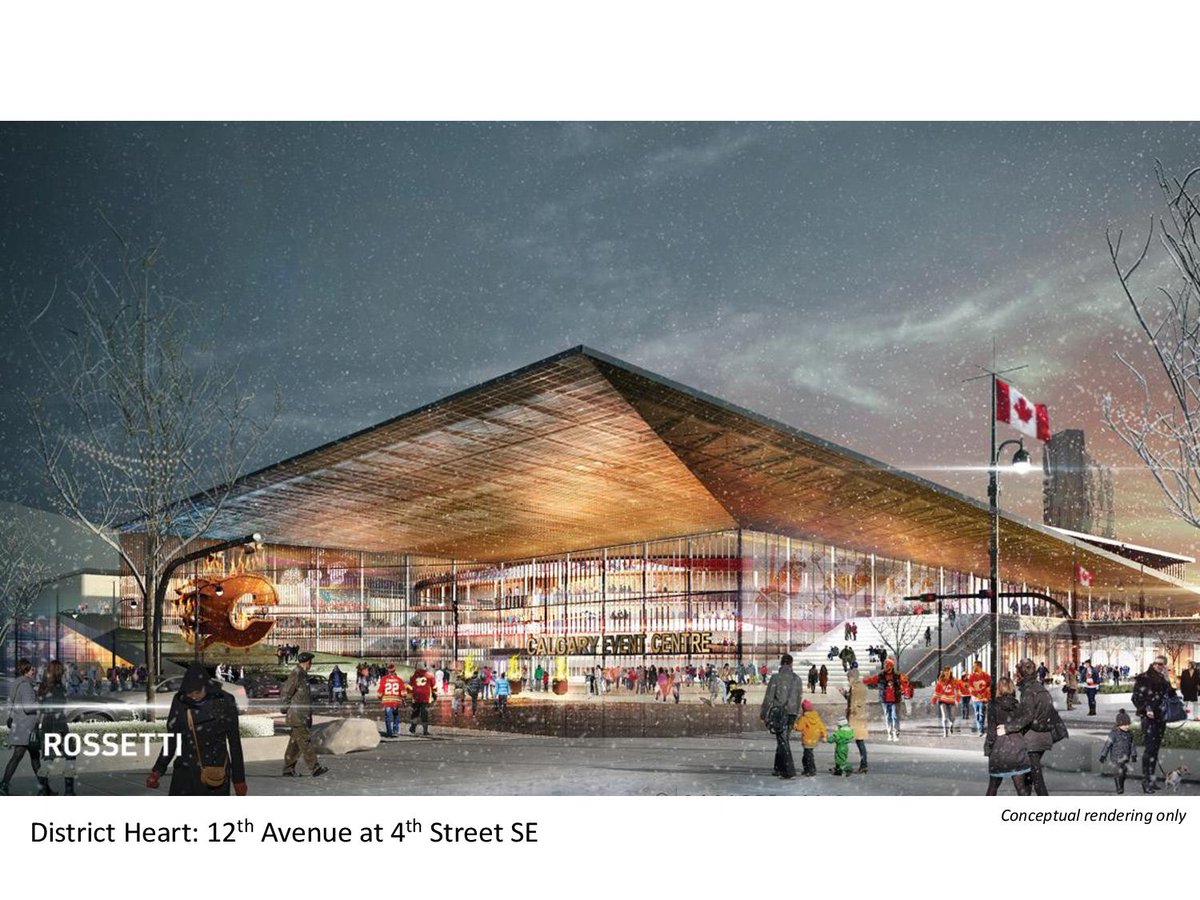 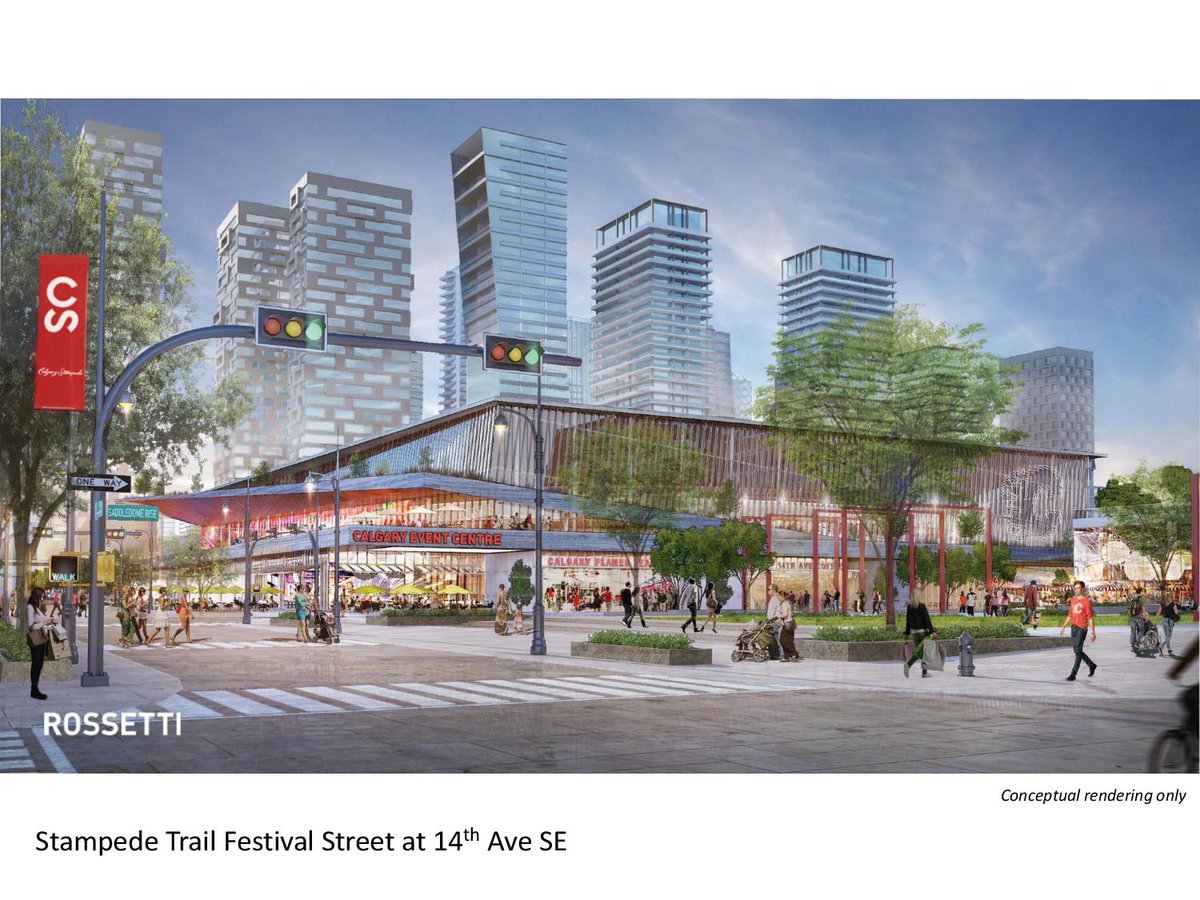 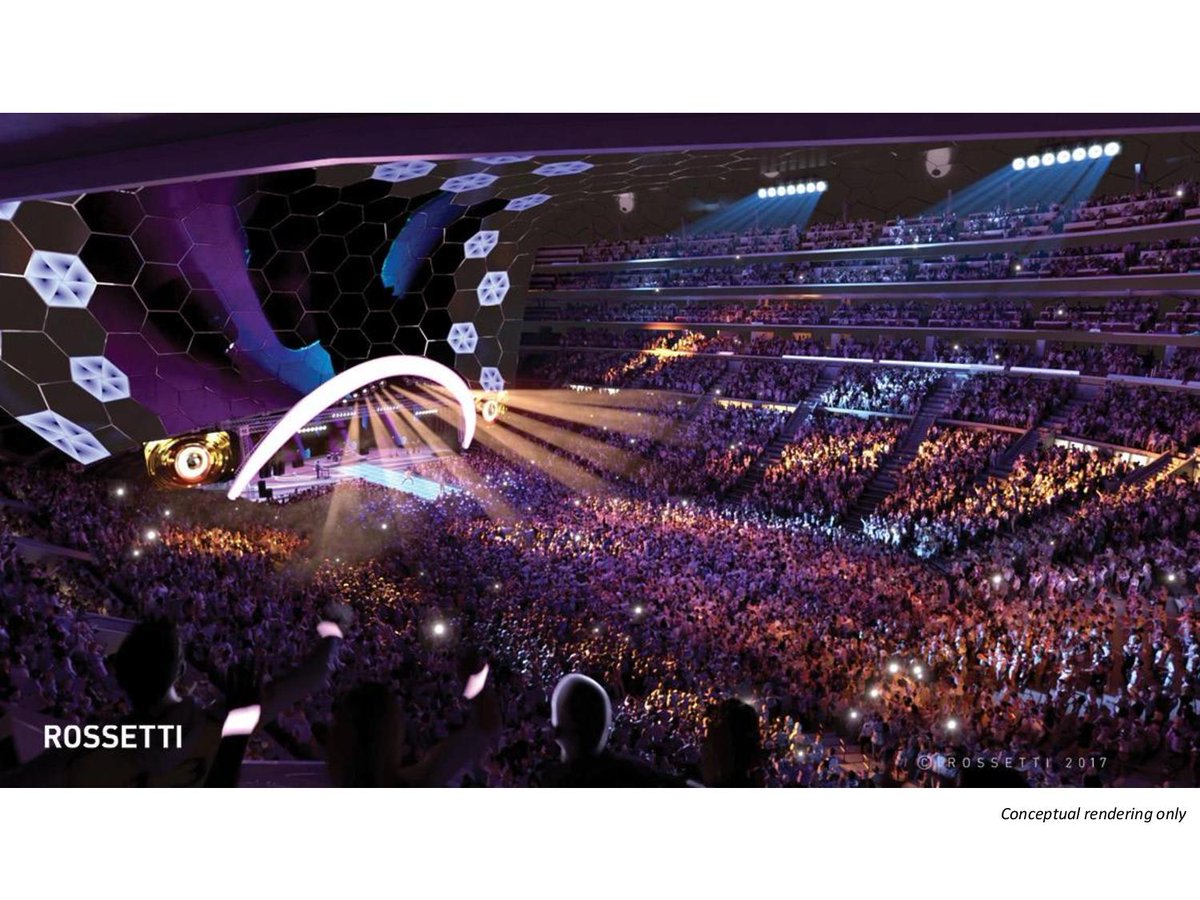 https://pub-calgary.escribemeetings.com/filestream.ashx?DocumentId=69249
This is the orginial document from last week. Looks like December is when the final plan is going to be ready.

The Calgary Stampede has been talking about an entertainment district on the north side of the grounds since at least 2010. This talk was independent of a new arena.
However, now more than ever it makes sense that the new arena be located nearby the entertainment district. This would definitely make the entire area a true 'destination'. I hope, we can kill any further thought of the arena going in West Village or the Firestone site.

https://calgaryherald.com/news/local-news/calgary-event-centre-cost-estimate-comes-in-at-550-million
Arena project could cost up to $600 million: CMLC

With the Olympics off the table I think it's time to take a run at this.

I agree the Arena/Entertainment District altogether. The city could not have done both the Olympics and this.

JonnyCanuck said:
I agree the Arena/Entertainment District altogether. The city could not have done both the Olympics and this.
Click to expand...

The Olympics included this project. It included Hall F and the public contribution to an arena (packaged as 100% funding for a Corral sized arena).

The Olympic proposal did not include an NHL size arena which has significantly more impact with NHL games, concerts and other major events as a draw. A lasting legacy of the new arena + Entertainment District + BMO Centre expansion + re-purposing of the Saddledome has much more appeal, in my opinion.

It included money which would have worked perfectly well for a NHL arena. In no scenario would you have built both. They didn't want to tie the bid's chances to arena negotiations for sure, and make the plebiscite about the arena instead of about the Olympics. But you have to be deliberately obtuse to think "Now that the Olympics are not going to happen, where federal and provincial extra special money was going to contribute to the capital cost of sports infrastructure like arenas, now it is much more likely that an NHL sized arena is going to be built".

The bid didn't have pictures of mascots, or an explicit promise that we would have mascots, but similarly, to believe that there was no likelihood of mascots because of that, is a stretch.

And the bid did include BMO Centre expansion.
Last edited: Dec 17, 2018

I think the Olympics would have ultimately led to a new NHL arena, but at the same time there was no guarantee. I wish the Olympics proposal had firmer plans for a new arena as it might have changed some of the voting. Everyone I knew focused on the plan of getting a 5,000 seat arena which didn't appeal to people. Myself, I thought the new NHL arena probably would have came about, but with the firm plans it was hard to know for sure.

Now is a good time to reboot and for both sides to come together and tackle how to get a new arena.

Yeah, now it just means the city has to pay 100% of any public contribution.

Fair enough, but if the city's contribution was going to be ~$390M for the Olympics, it should still be enough to contribute that same amount get a new $600M arena underway no?

Zoom said:
Fair enough, but if the city's contribution was going to be ~$390M for the Olympics, it should still be enough to contribute that same amount get a new $600M arena underway no?
Click to expand...

Yes, but the fieldhouse also has to be paid for if council wants it (there is matching for that at least). And affordable housing (same matching wise). Unfortuantely for some things like Arts Commons, now the fieldhouse competes against it for grants, instead of the Olympics funding the fieldhouse, and leaving the normal grants free to be used on other things.

So there will have to be some prioritizing. What will have the greater ROI for the city? Obviously, the new arena together with all of the other surrounding amenities in Victoria Park. The field house, though needed, will primarily be used for minor league sports and Stampeder practices.
You must log in or register to post here.
Share:
Facebook Twitter Reddit Pinterest Tumblr WhatsApp Email Share Link