Thought this one was dead, but apparently there is still stuff going on behind the scenes... The Edmonton Downtown Academic and Cultural Centre Foundation has hired an architect to do concept designs after talking to the University of Alberta and arts organizations about such details as the floor space and theatre features they need, spokesman Godfrey Huybregts said Tuesday.

He wouldn’t identify the architect, but said the concept information will be used when detailed designs are created.

“We want to make sure we engage (potential tenants) early in the process.”

The project, set for land around the northeast corner of 101st Street and 103A Avenue, is intended to have four theatres, a covered public space and a multi-use building.
Click to expand...

Never mind that oil prices are $27 US a barrel. Never mind that the project lost its key political champions when Stephen Mandel and Dave Hancock exited the political stage. Never mind that many in the Edmonton arts community oppose the Galleria, which they see as a luxury venue they’ll never be able to afford, and one that is siphoning off their own traditional donors.

The Galleria’s backers aren’t backing down. In fact, they insist they’re “shovel-ready.”

The Edmonton Downtown Academic and Cultural Centre Foundation confirmed this week it has hired an architect to come up with concept designs for its dream project, a combination theatre complex, concert hall, arts campus and commercial development.

And, says Huybregts, they’re set to go with the first phase of the development, which would be built atop the existing Epcor Tower parkade.

“That’s why we call it shovel-ready. We can start building right on top of a foundation that already exists.”

Yet shovel-ready is an odd term for a project with no commercial anchor tenant and no confirmed federal or provincial support.
Click to expand...

That whole block is going to look unrecognizable in a few years. I guess with EPCOR and the RAM it already is in a sense.
Flickr​

Edmonton Galleria has city deal, but provincial support not there
Edmonton’s proposed Galleria project now has a deal in writing with the City of Edmonton, but support from the provincial government seems much less likely.

On Thursday, the foundation backing the Galleria signed a memorandum of understanding with the city detailing who will pay for what if the project is built.

The memorandum explains the city will contribute $58.3 million toward the Galleria — $42.5 million for land, $8.3 million for transferring the Edmonton Reuse Centre and closing a road, and up to $7.5 million for the $30 million pedway connection to the LRT.

Central to the idea’s success is a plan to move several faculties from the University of Alberta downtown into the new complex, which the province would have to agree to support.

Newly appointed minister Marlin Schmidt said the Galleria is not a top priority.

“We need to be conscious of the current economic reality and focus on the pressing needs of institutions province-wide," said Schmidt. “When it comes to the government's priorities for capital spending this year, the Galleria project isn't on our list."
Click to expand...

Edmonton Galleria uses newly signed city support to woo province, federal government for cash
A new deal with the City of Edmonton will go far in wooing the provincial and federal governments for cash to build the $850-million Galleria, says a spokesman for the proposed downtown arts and culture development.

The Edmonton Galleria Foundation and the city signed a memorandum of understanding that details the responsibilities of each party, the foundation announced Thursday.

“It’s important for us because we can now take this to the provincial government and to the federal government and say the city’s completely on board, and here’s the way they’re going to contribute to the project,” foundation spokesman Godfrey Huybregts said.

Under the agreement, the city will contribute $58.3 million, including up to $7.5 million toward the estimated $30-million cost of designing and constructing a pedway from Churchill LRT station to north of 103A Avenue. The city will provide another $42.5 million for land related to theatre development, but retain titles to the land and also close a road and transfer the former Edmonton Reuse Centre to the foundation at a cost of $8.3 million.
Click to expand...

Is this still moving ahead in the background? Nothing in the provincial budget as far as I saw. 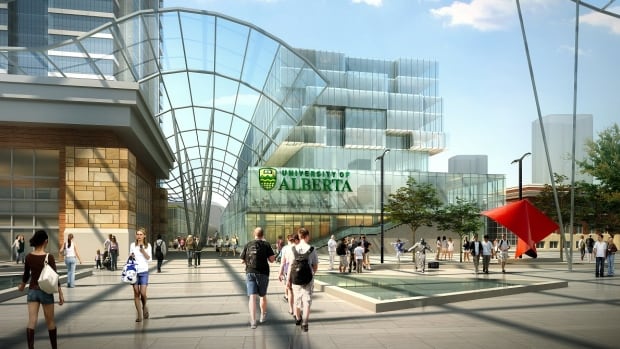 The Edmonton Galleria project, an arts district proposed for downtown, has been suspended. (Edmonton Downtown Academic and Cultural Centre Foundation )

The Galleria Project, a sprawling arts district proposed for downtown Edmonton, has been suspended by its board of directors.

"Bringing Edmonton Galleria Foundation's vision to life required us to be able to bring several different components together," reads the statement.

"Unfortunately at this time, and despite the significant support from the City of Edmonton, we have been unable to reach our milestones.

"The proposed state-of-the-art performing arts facilities were to be supported by the development of income-producing real estate which also would have provided a sustainable funding source for the arts and culture in Edmonton through the Edmonton Cultural Trust Foundation.

"The Board of Directors is appreciative to all those who supported the project."
Click to expand...

AHS signs in CN and this is withdrawn days later isn't a coincidence.

I would like to pick up where the Kipnes' left off...

Galleria has been lobbying hard since at least 2011 that the province or agencies of the province should lease substantial space to ensure this project went forward.

Not quite dead yet? Land sale? Pigeon rehoming initiative?