^^^ If you were a betting man, what do think we will see in terms of technology and train types?

They basically said that it's going to be catenary. They did everything but say "We have chosen catenary wires as the system" but the electrification and full business case reports are littered with references to catenary.

The first indication: the covers Notice the pantograph on the full business case report Actually, they did come out and say it was going to be catenary

From the open house presentation They've been coming for quite awhile. Any day now. 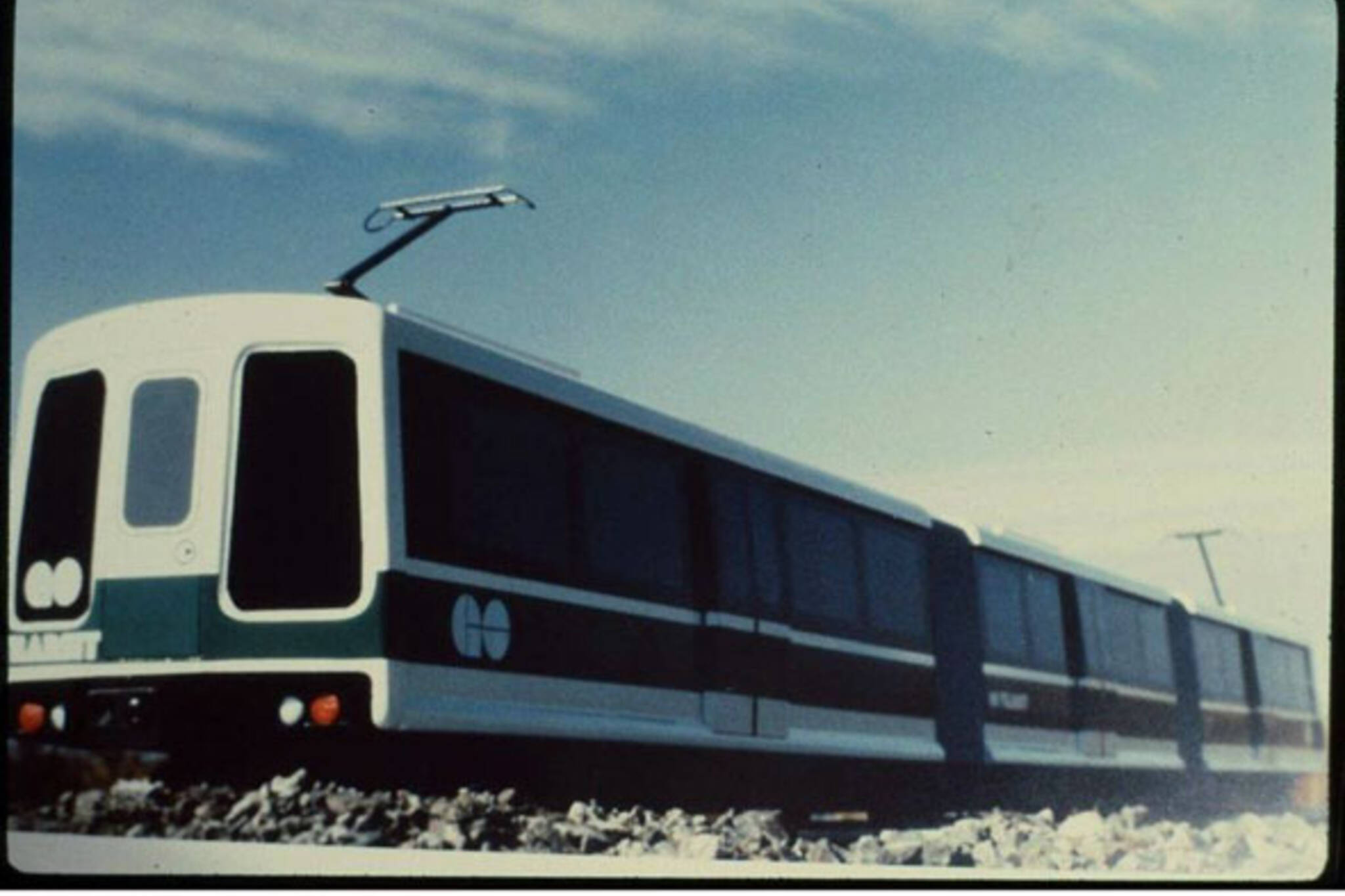 ssiguy2 said:
The choice of technology has not been chosen or we wouldn't be having this conversation. If they knew it was catenary then that would have been announced when they brought in the finalists for the procurement but they didn't. The only qualification that Metrolinx gave for the entire project is that it had to be electrified and there are several different ways to bring that about. Now they realise that the entire procurement process has been botched and basically this is just going to be a decision by Queen's Park with an obligatory rubber stamp from Metrolinx. Metrolinx screwing up of the entire process has relegated them to be being nothing more than a mouthpiece having to explain the decision the province has made for them.
Click to expand...

You are underestimating the need for QP to say their “decision” was made by somebody else.

I’m sure that in the back room they know that the bidders will propose wires. And they may be quite happy if a bidder suggests sticking with diesel. Lower bid price today, even if cost over the contract term is greater. They can also deflect that decision.

Let’s face it.... if the pure financial cost-benefit of electrification were so dramatic, some private party would have offered to build the wires as a moneymaking venture. I’m not disputing the desirability of electrification, I’m just saying that proving the solution is easier than selling it to stakeholders as a good use of scarce tax dollars or private investment capital. The cost-benefit really hasn’t changed for a decade or two.

QP will let this wander wherever it leads, provided they can deflect the accountability.

44 North said:
They've been coming for quite awhile. Any day now.

Total aside, but for all the issues with ICTS and GO-ALRT these would have been damned good looking trains.

Bureaucromancer said:
Total aside, but for all the issues with ICTS and GO-ALRT these would have been damned good looking trains.
Click to expand...

This might be off topic, but as someone who knows about GO ALRT, what were some of the issues with it?
R

Bureaucromancer said:
Total aside, but for all the issues with ICTS and GO-ALRT these would have been damned good looking trains.
Click to expand...

I always love looking at the photo mockups of ALRT, of what might have been, like the GO ALRT over the 401 There's a benefit to elevated systems in that it adds visibility in the minds of those who don't ordinarily use it.

robmausser said:
I always love looking at the photo mockups of ALRT, of what might have been, like the GO ALRT over the 401

The route maps are quite interesting as well. t54zhao said:
The government doesn't care about the construction costs as long as they don't exceed the potential benefits (upwards of $42B).
Click to expand...

I certainly hope this is not true. This is pretty bizarre thinking. Just accept the first solution that has positive benefits:cost ratio? That's not how you decide on investments!


north-of-anything said:
Also catenary electric trains are prettier than people give them credit for. You can't actually see those "unsightly wires" from more than ~300 meters away (or maybe I'm just that near-sighted), and it's a better deal than the smell of diesel.
Click to expand...

I find the idea of people complaining about catenary bizarre. Rail lines are not particularly pretty. And we deal with streetcar wires above many city streets, never mind in rail corridors. If we were going to prioritize aesthetics, we would be using batteries or hydrogen on streetcars to eliminate those wires.
Member since February 10, 2002
R

Coolstar said:
The route maps are quite interesting as well.
View attachment 278099

Would have transformed the north part of the city.
U

ARG1 said:
This might be off topic, but as someone who knows about GO ALRT, what were some of the issues with it?
Click to expand...

I think one issue was that not enough land was banked before the plan was scrapped. And of course, the usual Ontario/Toronto habit of tearing up old plans to concoct new ones. In the meantime, development continued unabated and now there's much less, if any, room to build a system like this.
A

Coolstar said:
The route maps are quite interesting as well.
View attachment 278099

A shame this never happened. I thing recreating something connecting the GTA without going through Union needs to happen.

A Summerhill GO TTC Transit Hub is needed. However, the NIMBYs would have none of that. Maybe by the 22nd century? The Midtown GO Train line is a possible name for a decades-old proposal for GO Transit to route commuter trains off of the tracks into Union Station and along the Canadian Pacific tracks running through the middle of Toronto, north of Dupont Street. Such a route could connect with the Toronto subway at Kipling, Dupont and Summerhill stations before heading to the northeastern reaches of Scarborough. West of Kipling, a Midtown train would follow the route of the GO Milton line, serving the middle and northwestern stretches of Mississauga. East of Scarborough, the Midtown train could bring commuter rail service to the planned community of Seaton in northern Pickering, and even to the city of Peterborough.

A History of North Toronto Station

The centrepiece of the Midtown GO Train line would be the historic North Toronto station building on Yonge Street, two blocks south of Summerhill station. This beautiful building was designed in 1915 by Darling and Pearson architects. The cornerstone was laid on September 9, 1915 by the mayor of Toronto at the time, Tommy Church. Construction work was handled by P. Lyall & Sons Construction company and, less than a year later, the station was officially opened for passenger service on June 14, 1916 (though passenger trains had been stopping at the station as early as June 4).


North Toronto station was the Canadian Pacific's flagship station for Toronto. It featured a clock tower that ascended 140 feet into the air and could be seen for miles. The building itself offered stair-less access to the passenger trains. The whole building was finely ornamented, made from beige Tyndall limestone from Manitoba, and beige, brown and green marble throughout the interior. Ornate white plaster ceilings graced the waiting rooms.


North Toronto station was barely eleven years old when its use began to decline. Canadian Pacific joined with Canadian National to build Toronto's Union Station and, once the station opened in 1927, more and more CP trains were routed there. The Great Depression cut into Canadian Pacific's ridership and revenues, and CP and CN soon pooled most of its Toronto-Ottawa-Montreal trains, making North Toronto station redundant. The last paying passenger filed through the station on September 27, 1930. Space in the northern portion of the terminal building was given over to Brewers' Retail in 1931.


North Toronto station did see further use. At 10:30 a.m., on May 22, 1939, King George VII and his consort, Queen Elizabeth (mother of Queen Elizabeth II) arrived on a royal visit to Toronto. After meeting dignitaries and waving to crowds, the king and queen left Toronto via Union Station. During World War II, troop trains brought returning soldiers through North Toronto station, and these would prove to be the station's last passengers....
Click to expand...

The Davenport Diamond is step one.
[SIGPIC][/SIGPIC]W. K. Lis

W. K. Lis said:
A Summerhill GO TTC Transit Hub is needed. However, the NIMBYs would have none of that. Maybe by the 22nd century?

The Davenport Diamond is step one.
Click to expand...