I've always said that removing some of the concrete exterior to open up the SkyDome to the city and the city to the SkyDome would help both the atmosphere inside the stadium by bringing in natural light and views to the city and reduce the imposing stature of the stadium to those walking on Bremner. It would also allow for views into the game without giving away free games. Rather than lose paying customers, I think it would entice people to buy tickets to go inside to watch. I get that urge whenever I get a glimpse of the grass and fans through the store windows.

They should also replace some or all of the ticketing booths with space for restaurants with patios on Bremner. Add electronic ticketing kiosks dotted around the stadium instead. Why do we still need people selling tickets behind a glass?

Tuscani01 said:
Happens way more than you'd expect. They are both companies that rely heavily on red for branding. It's easy to confuse the two. I remember Olivia Chow being late to a meeting once because she went to the wrong place, after being told it was at the Rogers Centre.
Click to expand...

I just doubt that's the case. One anecdote about Olivia Chow is not very convincing. We'll have to agree to disagree. To the extent anyone is confused (a small number I presume), it would have more to do with the fact that the two buildings are the two main sports facilities in Toronto, both located downtown close to one another south of Front Street, not because they both have the word "Centre" in their otherwise dissimilar names. Otherwise, we should consider renaming City Hall and/or St. Lawrence Hall, because presumably the use of the word "hall" in both causes confusion and Olivia might go to the wrong place again.


Tuscani01 said:
Just looking at Twitter metrics for one comparison, Rogers Centre has been used 216 times since August 24th vs. Skydome which has been used 682 times. Clearly Skydome is still the preferred name. That's 3 times as many people calling it by its old name than the new name, and those tweets have had nearly 3 million impressions vs. under 800,000 impressions for Rogers Centre.
Click to expand...

Twitter? With the 140-character limit, people will naturally prefer the 7-letter SkyDome to the 13-character Rogers Centre. That's proof that SkyDome has almost half as many characters as Rogers Centre, not that "SkyDome is still the preferred name". To see media usage, try Google News, where SkyDome + Toronto (I added "Toronto" to the search because the National Corvette Museum in Bowling Green has a facility called Skydome that is reopening this week) got less than one tenth of the hits as "Rogers Centre" + Toronto (4340 vs. 39,100). In other words, people are reading, hearing and seeing the Rogers name all the time in the media, which is what Rogers wants. Even a regular web search with Google has Rogers Centre on top (659,000 to 415,000). When you add "Blue Jays" to the mix instead of Toronto, it's 514,000 to 160,000. I hate that Rogers has succeeded with the rename, but as I said before they've succeeded in getting most people to say and write the name Rogers, regardless of whether people like you or I continue to call it SkyDome.


Tuscani01 said:
Keeping SkyDome in the name, or even simply dome would have likely lead to way more people using their handle than the old name.
Click to expand...

There is no evidence of that. Naming rights for large sports facilities in big cities go for millions of dollars. When big money is involved, names are not chosen on a whim, but only after study and examination of precedents. If keeping old names versus soulless "centre" and "place" monikers clearly worked as well, the marketing people would choose the old names. They don't.


Tuscani01 said:
Even the media refers to it as 'the dome' quite often.
Click to expand...

A noted above, not that often. Again, Rogers won that bet because their name is in the media way more. That's why it's called Rogers Centre, as much as it galls me.


Tuscani01 said:
I guarantee "The Rogers Dome" or "Rogers Skydome" would have given them way more exposure than the current name, and judging by Scotiabank's success with Saddledome, I wouldn't be surprised if Rogers ended up with more exposure too had they kept the original name.
Click to expand...

Again, there is no evidence of any of that. The only evidence is that Rogers owns the stadium, renamed it after itself, and people now use the Rogers name all the time to refer to it. Rogers wins. The rest of us lose.

Not that I wouldn't love it if the place were renamed "Rogers SkyDome" (Rogers Dome isn't much better than Rogers Centre). But I'm not going to deny that Rogers made a safe and successful choice in renaming it Rogers Centre, on the basis of their narrow self-interest. And I think we do both agree that that sucks.
Last edited: Sep 1, 2015

Consider the Braves new stadium is 622 million... so 400 million it makes one wonder what they have planned. Its too bad they couldnt rotate the baseball field and partially blow out the bremner side installing a large window giving everyone a nice view of the lake and the islands.

In a perfect fairytale land, I would want the hotel gone, and just have open air looking out to Front St, with the necessary support structures. Have retractable glass similar to the one at Minute Maid Park in Houston or Miami's new stadium. Again, will never happen.

I have pondered the idea about the 500s being closed off permanently in some sections, but I feel Toronto is too strong of a market to do that. Yes, when the Blue Jays are bad, it's not always filled. Though right now, they are on pace to sell out 26 games, maybe more if tonight and tomorrow's game reaches 45k (currently at 40k for both).

Tuscani01 said:
I remember Olivia Chow being late to a meeting once because she went to the wrong place, after being told it was at the Rogers Centre.
Click to expand...

Spend the money on demolishing it lol.

Hamiltonian said:
Spend the money on demolishing it lol.
Click to expand...

It'd be nice to have a traditional ballpark. I went to Progressive Field a couple years ago and th difference is stunning
*****
Cityscape Wall Art Store (Just Launched!)

ShonTron said:
...
My idea: have the spitting Robbie Alomar (complete with water feature) stand right in front of the Ted statue.

Model on this idea... 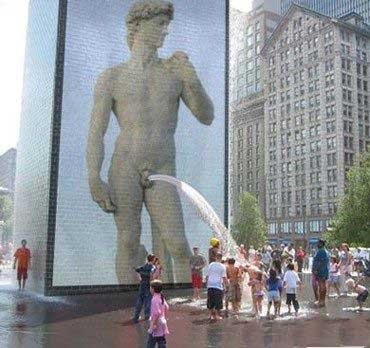 but with Robbie's face, of course.
[SIGPIC][/SIGPIC]W. K. Lis

Sounds like they are looking at the possibility of ETFE roofing to me - as an example of what the material can do - see: http://populous.com/project/forsyth-barr-stadium/

Also glad to hear that the awning and exterior landscaping is in the workplan.

Changing the roof material to something that let's in light is something I've been thinking would be great as well. I've also thought of cladding a lot of the ugly exterior concrete in a brick cladding would definitely brighten the exterior.

I'd also like to see the concrete exterior covered in brick or even the white PVC material on the roof.

This will greatly improve the experience of watching a game! It's so tight in there now.

Meanwhile, on Wikipedia, Rogers Centre has many times more views than SkyDome.