ChesterCopperpot said:
You know the city cannot do that right?
Click to expand...

Yeah. And painfully so...

Even if they had that power, given council is what it is, any hypothetical situation like that would end up with some sort of silly deal where G+C gets banned in the suburbs, but becomes the only developer allowed to work in downtown, or something equally nonsensical.

Anyway, back to the hot mess at hand, it is truly shocking how bad that Yonge St podium facade is. Idk who though some vertical lines would make it look less monolithic, but the attempt failed so badly. Like, this makes the Aura podium look delicate and fine-grained in comparison

TossYourJacket said:
Even if they had that power, given council is what it is, any hypothetical situation like that would end up with some sort of silly deal where G+C gets banned in the suburbs, but becomes the only developer allowed to work in downtown, or something equally nonsensical.
Click to expand...

You know that G+C is not a developer, right? You there are no bans, right?

UtakataNoAnnex said:
They seem to picking off some of biggest plumb spots off late. Perhaps The City should put a moratorium on them...as Toronto needs to start moving/evolving away from the lowest common denominator designs. And these guys are not helping at all in that. /sigh
Click to expand...

Time to build a wall and make G+C pay for it.

interchange42 said:
You know that G+C is not a developer, right? You there are no bans, right?

Lol oops. Definitely was not awake enough when I wrote that

interchange42 said:
You know that G+C is not a developer, right? You there are no bans, right?

To be clear here, I am also aware of that.

And to be also clear that my original post was half joking and half wishful thinking and should not be taken as fact nor claim. The problem at attempted wit over the internets is that the nuance sometimes gets lost in the lack of context.

That said, I still apologise for any confusion this may have caused. And I'll try to be more careful with what I say in how I am saying it in the future. /bows
Quadruple "A" geek: Architecture, Azeroth, Anime, Aphex Twin.

Msleylar said:
Time to build a wall and make G+C pay for it.
Click to expand...

Love the way you attached the Etobicoke's building map with Torontos on the flyby Koops . You can see other densities from afar. Might as well attach all Toronto's districts together and see how it looks lol! Always great work thanks!! 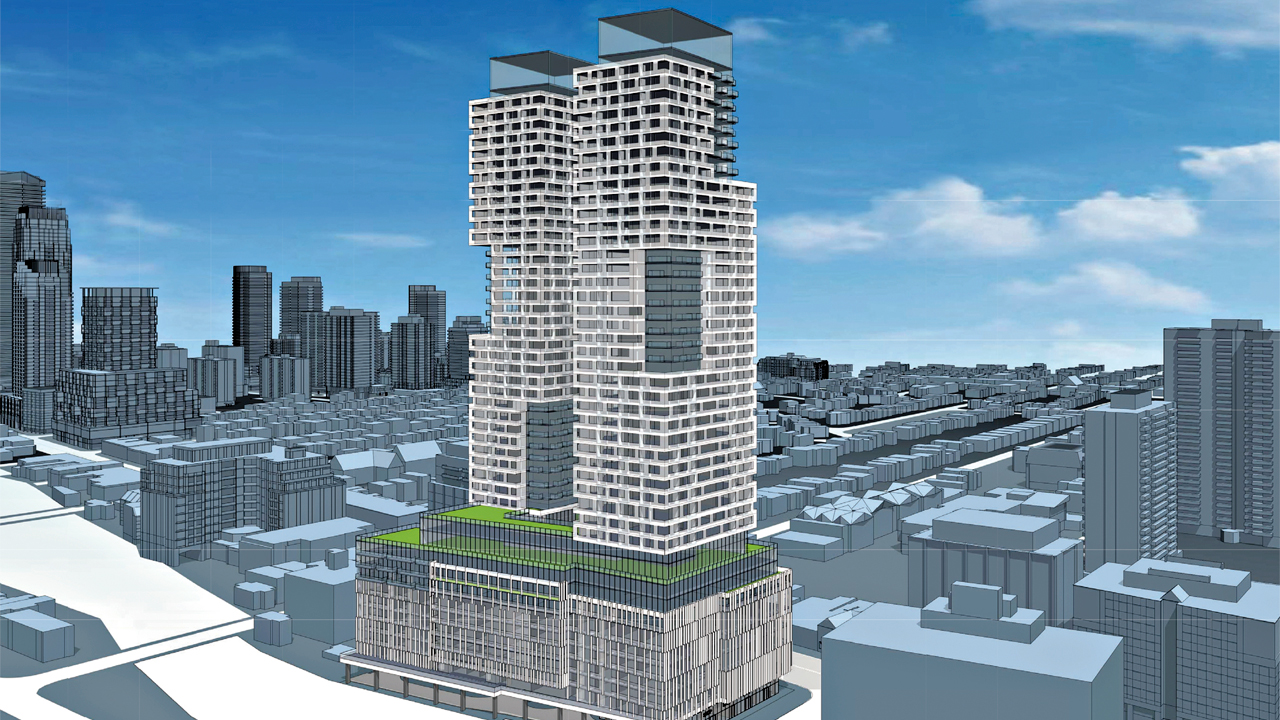 Residents have questions about continued development

The two towers would contain 880 condo units and 102 rental units, whereas the podium would host 13,315 square metres of office space and 1,692 square metres of retail space. Residential units would be a mix of 60 studios, 520 one-bedrooms, 305 two-bedrooms, and 97 three-bedroom units.

Local councillor Josh Matlow’s chief of staff, Andrew Athanasiu, said that the application has come as a surprise.

He added that it seems like it was rushed in order to get ahead of the city’s new inclusionary zoning policy that would require developments to include affordable housing, which this does not.

“We heard nothing about it, and then it sort of came out of the blue,” he said.

Athanasiu said the application is a “bit of an overdevelopment” and that the area doesn’t have the services in place to accommodate the extra people.

The new Davisville Public School recently opened in the area but he said it is already close to being full, leaving a concern over where additional children would go to school, as well as daycare.

There already is a two-tower 30- and 45-storey development in progress across the street at 1951 Yonge St., which Athanasiu said has set a precedent that this application is now picking up on.

“There’s very little within our toolbox, given the provincial regulations, that we can do about it,” he said.

Resident group Oriole Park Association’s board member Lynne Frank said residents are concerned about the lack of schools but also a lack of green space in the area.

“It’s pretty cramped,” she said. “I didn’t see any room for grass or trees or for people to walk their dogs.”

Frank has watched as the area has been changing from quaint mid-rises and locally owned stores to being filled with huge developments that will likely host big box stores.

Frank would prefer to see the area be more pedestrian-friendly where people would like to linger.

“The nature of the area has changed,” she said. “It seems to be overbuilt.”
Click to expand...