Fwiw, Marlin Spring's website are showing a rendering of the design by Giannone Petricone.

Although it could still be subject to change or value engineering of course... 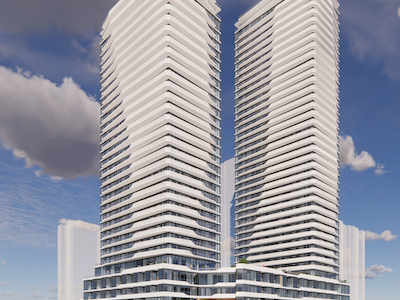 The Marlin Spring Development Fund has also acquired 10 single-family homes from 10 owners between 316 and 336 Campbell Ave. in Toronto’s Junction Triangle neighbourhood northwest of the downtown. No financial details were disclosed.

Marlin Spring closed on the first house 13 months ago, while the final sale closes this month. All but two are vacant and the remaining residences should be vacated in the next couple of months.

Marlin Spring is proposing to build a 26-storey, 230,000-square-foot tower with 313 market-priced condo units as well as some rental replacement units on the assembled properties, which comprise just under an acre of land.

-------
Marlin Spring anticipates launching sales for the project later this year and Lopes said a major selling point will be the unobstructed views the building will offer. The development’s south end will also include landscaped, privately owned but publicly accessible space.
Reverie
Flickr

A new rendering is updated in the database! The project information has several changes. The total unit count increased slightly from 310 units to 313 units. The overall building story count decreased from 28 storeys to 26 storeys. The height of the building changed from 95.20m to 88.4m. Finally, the total parking spaces decreased from 110 parking spaces to 103 parking spaces.

The rendering is taken from the architectural plan via the Rezoning application: I'm willing to bet this will be redesigned again before we see construction here. Marlin Spring wont be executing anything that looks remotely close, knowing how they like putting up garbage everywhere. I welcome the orange! Tbh basically every big building in this neighbourhood is utter junk and terrible in execution so that's my expectation now and just the small victory of having a warm colour is a relative win. It's an ugly skyline around here aint no mistake, but I think the orange will be something positive regardless of how the rest turns out. Hopefully they don't get rid of it. In the presentation they talked about it being a colour pulled from the rusts colours of the neighbourhood and the orange Railpath and hopefully they keep that idea.

The somewhat punched window look is encouraging as well and hopefully will be maintained. Surely there with be copious spandrel and mullions in there, but some solid materiality is good so we don't just end up with pure window wall spandrel and mullion junky Borg cube architecture.

It's not a high bar but this in the running for best building on the skyline at this Dupont & Lansdowne and area cluster, providing there aren't significant changes or execution issues.

I also welcome the population density this will add either way. I live very nearby and it's a great neighbourhood and stretch along Dupont but it's still a little sleepy and I think lack of foot traffic on the street and population in the area limits the potential for business along the stretch, and there's a lot of storefronts that are boarded up or converted to residential use. The area is kind of isolated by the railways on the north, west, and east with either low density (north and somewhat the south as well) or hostile streetscapes and intersections (east, west) zones on either side of that and then the long walk up from Bloor in the south (which is also dead and hostile around this stretch) to Dupont. Getting more population in the Junction Triangle itself I think could have a positive impact on the vibrancy of the area and maybe local business sustainability and viability as well.

I think a tower is totally good here, but I'd also like to see more proactive missing middle and midrise in the neighbourhood as well to add density, population, and mixed use vibrancy (retail, food, offices, businesses, etc.) to the middle of the triangle and throughout and knit it together as one whole vibrant urban zone. We already are a bit of an odd duck neighbourhood with missing middle and mid-neighbourhood retail and mixed use offices and businesses and stuff — we should embrace it and make the Junction Triangle live up to its potential and be one of the best urban neighbourhoods in the city!
Last edited: May 4, 2022
N

Final Report, Approval Recommended, to the next meeting of TEYCC:

TEYCC has also approved the zoning by-law amendment application for the development at 316-336 Campbell Avenue. This project proposes to build a development which would include 21 new affordable rental units. These units will be owned by the Community Affordable Housing Solutions Land Trust and will operate as co-op.

Along with the previously mentioned project at 640 Lansdowne, this project will proceed to the July 19th City Council meeting for final approval.
Click to expand...

Project being marketed as the "316 Junction Condos":

Get in on the action with this brand-new artistic and elevated condominium residence, introducing 316 Junction Condos.

When the landscaping is completed there, I'll go over with a skateboard and see if they don't mind (like in their main web image/video)
C

There's a house on this street that seems to be renovating. Like gutting the main floor back to the studs and re-doing it and they seem to be adding in and framing another new window facing out onto the street. Makes me wonder about timelines on this project. Maybe there's still viable time to rent it out and make some money back, but it seems like a strange thing to be doing right now when the house is going to be demolished for this soon enough. I wondered if it might be a sales centre they're building for this and that's still my best idea of what's going on there, but those are often off site nearby instead of in the construction zone.

It's a small strip of decent homes. That's the one thing that saddens me about this project. I'd rather see a parking lot, rundown homes, or other junk getting upzoned before this. Somehow seems wasteful.

vic said:
It's a small strip of decent homes. That's the one thing that saddens me about this project. I'd rather see a parking lot, rundown homes, or other junk getting upzoned before this. Somehow seems wasteful.
Click to expand...

More housing is always a plus in my books, but in an ideal world, I wish they'd been able to assemble the houses along Dupont west of Boo Radley's with some ground-level retail to activate the pedestrian realm rather than this block. Lots of SFH blocks of Dupont that could see similar densification -- I'm also thinking of the stretch between Emerson and St Clarens.

vic said:
It's a small strip of decent homes. That's the one thing that saddens me about this project. I'd rather see a parking lot, rundown homes, or other junk getting upzoned before this. Somehow seems wasteful.
Click to expand...