You are using an out of date browser. It may not display this or other websites correctly.
You should upgrade or use an alternative browser.
D

Actually read this on BlogTO first, looks like this will be Curio by Hilton, an upscale marquee of theirs.
Last edited by a moderator: Jan 10, 2022

Here's the report from Newswire:

Easton's Group of Hotels, a renowned name in Canada's hospitality industry with a comprehensive portfolio spanning premium, branded and upscale hotel properties across Canada, announces it will build Canada's only Curio by Hilton, the first hotel within 1km of Toronto's historic Distillery District. Located at 60 Mill St, the project will be perched at the entrance of the historic community and mark the last remaining heritage building to be re-purposed in the district.

Rising 31 storeys, the full-service hotel will preserve the heritage building's exteriors as the base three floors. It will span 288,000 sq. ft. gross floor area and feature 392 guest rooms, Hotealong with first-class amenities including a rooftop bar and restaurant with spectacular views. Led by a talented team including IBI Architects, ERA Heritage Architects, and Studio Munge, the project will pay homage to the building's rich history as a rack house built in 1890. This previously stored up to 15,000 barrels of alcohol as part of the liquor manufacturing operations of the Distillery District, until its closure in 1990. While the tower emerges from the top of the heritage building, it will feature "reveal floors," which will be significantly set back to allow for a distinct visual separation between the old and the new. The entire volume of the existing heritage building will be publicly accessible to highlight the past use of the building to all visitors.

"We're thrilled to bring Curio by Hilton to Canada, supporting the Distillery District as a vibrant community and tourist destination that is highly in need of hotel accommodations," says Dr. Steve Gupta, Founder & Chairman of The Gupta Group. "Working with an immensely talented team of architects and designers, Easton's Group of Hotels will restore this historic building and transform it into a cherished landmark, celebrating its prolific history while leaving a legacy for decades to come."

Part of the reason this building has not yet been restored or in use for over 30 years is because the original architecture was extremely complicated. While the building was technically six storeys, it had no floors because it was designed for storing thousands of barrels of alcohol along wooden racks. In fact, the barrel storage racks forming the middle of the building are currently supporting the building itself, so any adaptation will require significant efforts to ensure that it is sufficiently supported once they are removed.

Easton's Group of Hotels will convert these six storeys into only three levels for Curio by Hilton in order to maintain the long windows, expose the original heavy brickwork, and give visitors a glimpse into the past. Real mixed feelings on this one. Complete clash in styles yet the base walls are to be fully maintained with a setback keeping the pedestrian experience intact. I have seen this sort of thing work but only if the new is done with exceptionally high quality materials. My first choice would be to refurbish the barrel house structure as is and allow a trade for greater density elsewhere in the area. I guess we'll have to wait and see how construction goes...
Last edited: Jan 18, 2022

...looks great? Now if they could remove the tower portion, I think we might be onto something! <3
Quadruple "A" geek: Architecture, Azeroth, Anime, Aphex Twin.

what is / who owns the building directly to the west of this site? DavidCapizzano said:
what is / who owns the building directly to the west of this site?

It's owned by the Province. Currently mothballed and no active plans for it AFAIK. 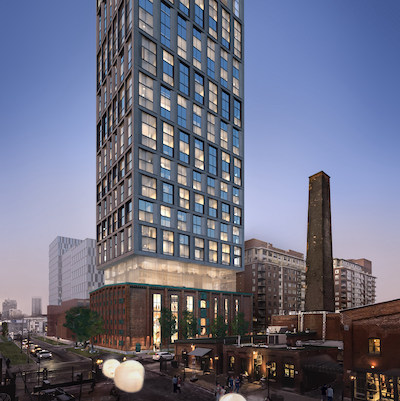 Easton’s Group of Hotels will build Canada’s first Curio by Hilton in the last remaining heritage building to be repurposed in Toronto’s The Distillery Historic District. The building was purchased by Easton’s Group in the summer of 2018 for $28

Easton’s Group’s hotels are located primarily in Ontario, particularly in the Greater Toronto Area, and include such brands as Marriott and Holiday Inn.

Gupta said he has a good relationship with Hilton’s top executives, and both parties agree Curio is the right brand for this project. One reason is that Easton’s Group won’t need to adhere to strict standards for furniture and other elements which some brands require.

“We were looking for a full-service lifestyle brand with the proper scale for this area,” said Gupta. “With this one we have the flexibility to create our own niche for the Distillery District and create a brand within a brand and rooms and furnishings that are unique for the site.”

The 31-storey, 288,000-square-foot, 392-guest-room hotel at 60 Mill St. will preserve the 132-year-old building’s exteriors as the base three floors. Some of the building’s public elements will reflect its history.

While the existing building is technically six storeys, it has no floors because it was designed to store up to 15,000 barrels of alcohol on wooden racks for the Distillery District’s large-scale liquor manufacturer. Those operations ceased in 1990.

The racks form the middle of the building and are currently supporting it, so removing them will pose unique architectural, mechanical and structural challenges.

“That’s probably one of the reasons why a lot of other proposals for the site could not advance,” said Angelucci.

The six storeys will be converted to three levels in order to maintain the building’s long windows, expose its original heavy brickwork and give visitors a glimpse into the past.

How would the floorplate compare to Shangri-La's? I have been to a function there a few years back, maybe 150 present, and while the service is excellent and the function room was fine, some of the mingling/pre-dinner/coat check/etc. areas were a bit awkwardly sized, narrow passages etc. because of the need to accommodate the elevator block. 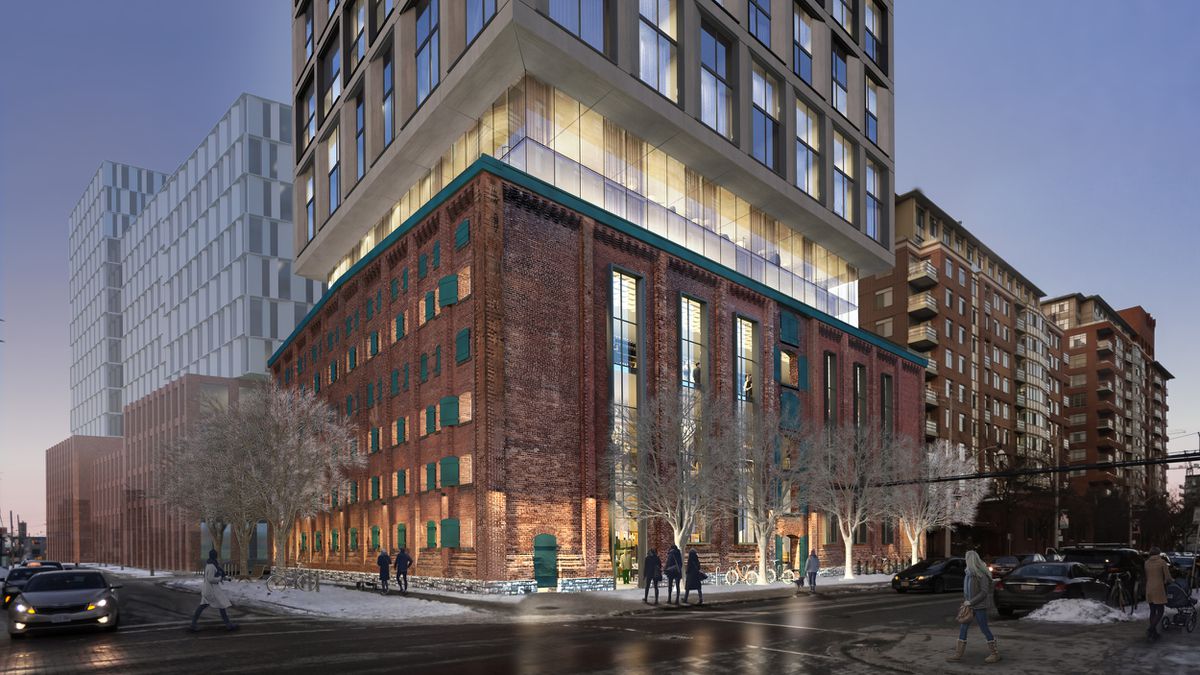 One of the last buildings in the Distillery District to be repurposed, Rack House D prepares to be reborn as the district’s first hotel

“They would manage them here for however long, if it’s two or five years,” says Andrew Pruss, a principal at ERA Architects, of the barrels. “And they’d have to rotate them every so often, and the guys would move everything around by hand – they’d lift them into the racks [and] they would walk along these walkways between.

“It’s kind of like a management system, but manual-labour based.”

Mr. Pruss has been doing heritage work in the Distillery for so long that he walks confidently in the semi-darkness, a path lit only by the thin, blue light from his smartphone. However, Dr. Steve Gupta, chairman of Easton’s Group of Hotels, Mario Angelucci, Easton’s executive director of development and planning, and architect Mansoor Kazerouni (global director of buildings at IBI Group) are walking with the same caution one might use on a frozen lake. That goes for this writer, and his pal, filmmaker Robert Fantinatto, who is here to take photographs: it’s the penguin-walk for us as well.

It’s certainly cold enough for a penguin in here.

Over the next three years, however, Dr. Gupta and his team are going to transform Rack House D into one of the hottest hotels in the city, a Curio by Hilton to be exact. And one of the prime reasons it’ll become such a hotspot is that the entirety of the heritage portion will be accessible to the public. No private guestrooms here: just a grand lobby space, a little bit of back-of-house, and bookable meeting rooms.

“We thought it would be great to create these tall volumes … and get a better sense of how these walls were constructed and the fenestration pattern,” Mr. Kazerouni says. “You can come sit in the lobby, you can come to the restaurant, have a coffee, have a meal, go up to the rooftop bar [on the] 31st floor – a very unique vantage point of the Distillery that doesn’t exist today.”

And, save for a few condo tower Airbnb suites, it should be noted that during the Distillery District’s almost two decades of existence – and despite the throngs of tourists it attracts – there has never been a hotel here. There have been rumours of boutique chains and a few failed attempts, sure, but nothing concrete – pardon the pun – until now. And that’s because of the complexity of keeping Rack House D standing, in situ, as the racking system (which supports some of the building’s weight) is removed and meticulously catalogued, and then, after a tower is placed on top and five levels dug underneath, taking the time and money to return portions of the rack to assemble it, artfully, will not be easy. It will, however, engage and delight patrons.

“The amount of investment that is needed to repurpose this building is huge,” confirms Mr. Angelucci (Dr. Gupta will later tell this writer it’ll be almost a quarter of a billion dollars). “It’s a massive amount of work, and we want to do it right.”

Renderings bear this out.

While long, glazed openings will be incorporated into the mostly blank south façade, the middle bay will retain its six large shipping doors (and their shutters), and the first and ninth bays will be left untouched. On the east and west façades, the rhythmic and symmetrical arrangement of 108 windows (per façade) will be retained, with some shutters left open and others closed. The angles created by these shutters-and-shadows, along with those of the flared brick courses at the bottom and top, have informed Mr. Kazerouni’s design for the new building.

“The details on [the new] window bays actually borrow from this building … by sloping the base of the vertical piers that make up those large windows,” he says. “In some bays it’s on one side, and other bays it’s on the other side, so that playfulness that these [existing] shutters represent, it’s carried up, but it’s trying to mimic it, it’s about trying to find a language or vocabulary this is synergistic with the existing building.”

To further allow Rack House D to exert its dominance – and proudly show off its gently sloping roof – the first two storeys of the new hotel will be set back considerably and fully clad in glass. And because the Curio Collection allows for non-standard decor, artifacts found in the building will used liberally.

As one of the last buildings in the district left to repurpose (across the street, the General Distilling Company Building, also by David Roberts Jr., awaits new life), kid gloves, a tender heart, and a motivation other than huge profit will be required.
Click to expand...

Odd that the new release references, "announces it will build Canada's only Curio by Hilton"
I was curious about the brand and took a look at the Hilton Curio website. There is a Montreal location already showing. Not sure if I'm missing some nuance there, but the Montreal hotel seems to think they are already Curio.

Stay at Vogue Hotel Montreal Downtown and enjoy our unique personality. Our attentive staff will make sure you experience the culture and spirit of the community.

Toronto Preservation Board consideration on February 22, 2022