Here's how King Toronto looks from the 32nd floor of The Well's office tower, unprocessed… …and here's how it looks colour corrected, as if the windows didn't have a strong green tint: 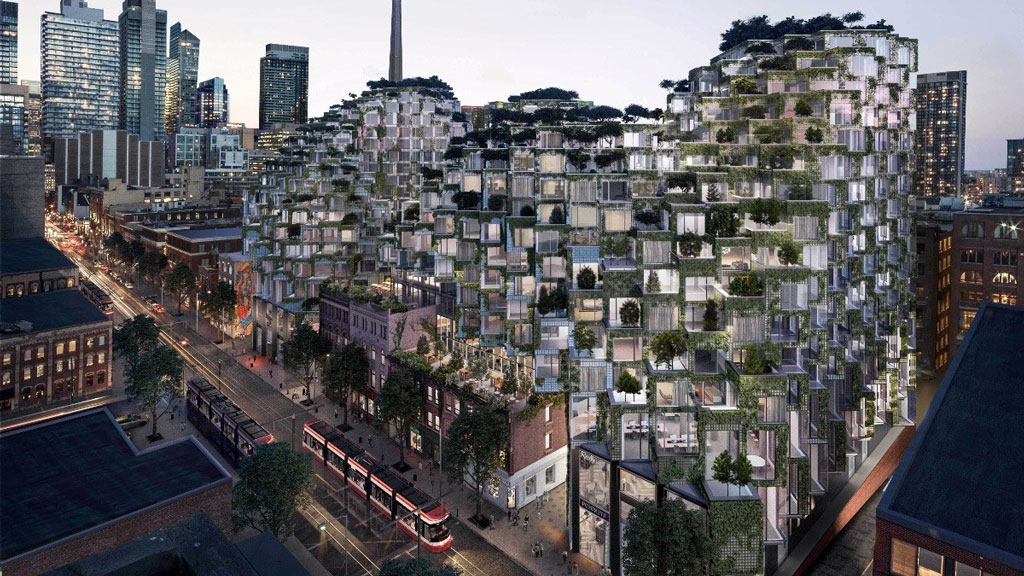 Software firm Autodesk released an analysis of the project in which it described how the designers, engineers, mechanical consultants and electrical specialists used BIM 360 to collaborate to create the glass-block facades, incorporate vegetation and integrate a giant underground stormwater cistern. The whole package had to meet Toronto Green standards.

The glass blocks could not be piled like building blocks, so the solution was to merge them into a curtain wall system. Blocks are joined into bigger panels with silicone joints for flexibility and installed into an aluminum frame cladding system, Autodesk explained.

Triple-glazed windows and thermal panels adjacent to the glass blocks were introduced, with the developers targeting LEED Gold.

Braun said the systems simply could not have been achieved 20 years ago.

“The computing power didn’t exist to do the structural load calculations,” said Braun, comparing KING Toronto to Westbank’s Vancouver House project. “What’s interesting about some of these buildings is that they’re so of-the-moment that, literally, they couldn’t have been done before. That what’s really cool.”

The design technology enabled the team to realize the vision of luminousness for the glass blocks, Braun explained.

“You don’t really realize how much it shimmers and how the light comes through the glass blocks, it has this glow to it. And there’s no building that will have this kind of soft glow to it, the shimmer effect. That was my ‘wow’ moment.”

The penthouses were given such names as the Teahouse, Greenhouse, Glass House and Sanctuary. One of them, at 5,000 square feet, sold for $16 million in 2020, the highest known condo sale to take place in Toronto during 2020 and 2021.

“They’re essentially homes in the sky,” said Braun. “When you think about it, if you wanted to hire a designer to design individual homes, to be there would be in the millions. You’re getting essentially a home designed by the world’s most prominent architects.”

ERA Architects is the heritage architect for the project, tasked with preserving the heritage buildings and advising on syncing the development with the industrial heritage of King Street, which now is a thriving entertainment district.

Braun said the “mountains” of homes were designed to weave in and out of the heritage buildings.

“When you walk into the lobby from King on your one side, you’ll see the facade of the heritage building in the lobby, with the stained-glass window. So it’s really cool how the old and new are brought together.”
Click to expand... Shout out to all the construction photo fans!
RM
K

It took a while to get to grade in this project This is going to be a weird build just by looking at the zig zag rod formation placed down on the groud floor ! As seen in the photos up lol!
M

I do find it somewhat disappointing that the underground parking has to empty out onto King street.
K

myself said:
I do find it somewhat disappointing that the underground parking has to empty out onto King street.
Click to expand...

Is there another option?
Yes, getting out of King West on the weekend is gonna be a GONG SHOW
Good luck owners
M

karledice said:
Is there another option?
Yes, getting out of King West on the weekend is gonna be a GONG SHOW
Good luck owners
Click to expand...

What's with the good luck?

Why would anyone think driving in the core of Canada's biggest city would be a breeze? I don't think any owners are going to be surprised. It might actually motivate vehicle owners to use their cars less. Owners did buy on a transportation line and there are bike shares all over this hood.

Anyone who bought in this building was pretty smart, it's going to be stunning and it's in an incredible location. Luck has nothing to do with this top tier project.

I am very fortunate to have purchased a nice unit here and the location is excellent, especially on King Street where there are traffic restrictions which have greatly reduced congestion and noise and made it very friendly to pedestrians and cyclists (I live a block away).
Traffic is terrible everywhere in the city and even though I don't drive much I avoid driving at certain times of the day when gridlock happens. Compared to other large metropolitan cities I think we are way behind in encouraging other modes of transportation and implementing proper transit and biking infrastructure. There are definitely too many cars on the road and to add insult to injury, Uber and Lyft have clogged our streets with so many drivers driving around our streets aimlessly finding their next ride -- regulation of the ride-sharing industry is painfully lacking and we are paying for it. There are too many people stuck in the suburban mentality where driving or owning a car is a must and are not very open to more efficient options for getting around.

KING Toronto has plenty of bicycle parking for its residents, commercial tenants and guests which is well designed (they even have two dedicated elevators for bicycle parking) which is a part of their LEED Gold requirements in making the development more environmentally sustainable and I applaud Westbank and BIG for being extremely thoughtful in every aspect of the design of this development which you don't see from other developers.

Here is a recent statement from Westbank:

Construction on KING Toronto is advancing well as we head into summer. Aside from the heritage facade structural supports, nearly all temporary structural supports have now been removed. The final king piles supporting the staging slab are currently being uninstalled as formwork progresses.
Performance mockup testing of the facade was completed this spring, undergoing various tests for wind and water to ensure the enclosure is properly sealed to withstand the elements.
As construction continues into summer, the team will be focused on pouring the ground floor slab, a massive undertaking which involves pouring approximately 7,000 square metres of concrete, 15% of the overall concrete required for the project. To put this into perspective, the three levels of underground that have been poured to date collectively amounted to 5,800 square metres of concrete.
You must log in or register to post here.
Share:
Facebook Twitter Reddit Pinterest Tumblr WhatsApp Email Share Link