Skyhigh2929 said:
So after a few legal threats I finally got someone from Greenland on the phone. The situation appears to be that they need to build a road. The land on which that road is to be built is owned by Greenland and 2 other developers. They have not yet been able to reach and agreement with those other two developers although they say they re in active negotiations. However until they reach an agreement the city cannot approve the application. Hence construction is stalled with no foreseeable resolution or restarting date. They said they expect to send out a general update in the final quarter of the year. (That’s the expected update not the approval!!!)
Click to expand... Survey plan also attached. Property line from both drawings should match.
Anything beyond property line Greenland has no ownership.
Both owners must agreed to convey their portion to Greenland/CITY for future road construction, and CITY would want environmental assessment on those lands along the process.

DSC said:
Technically they were not excavating (they did not have an excavation permit) but (as is common) they were dealing with 'soil remediation! That said, I certainly smell polluted BS.
Click to expand...

So they where saying the parrot was just "resting".
Quadruple "A" geek: Architecture, Azeroth, Anime, Aphex Twin.
W

Towered said:
How could they have begun excavation if that were the case? I'm smelling BS.
Click to expand...

Planning process can extend much longer and a lot developers choose to shoring + excavate first and achieve conditional building permit (below grade) before they reach bedrock (bottom of the foundation structure). If they don't get the conditional permit and the huge hole remains open to weather, it can be very nasty.

Greenland seems want to settle everything before any construction even begin, they need better time management and planning strategy ahead of time, all developers move forward on construction first and negotiate with CITY along the way.

They do have shoring permit and tieback agreement, which allows them for soil remediation work (for the MECP job). The real, known as "bulk excavation" might not happen until they settled items with planning staff from CITY.
Gamestonk!

I'm excited for this to go up.

denfromoakvillemilton said:
I'm excited for this to go up.
Click to expand...

Though I do not think this is an indication that Lakeside is restarting any time soon (with a new owner?), it is maybe, interesting that the building to its south is coming to TEYCC on June 30.

DSC said:
Though I do not think this is an indication that Lakeside is restarting any time soon (with a new owner?), it is maybe, interesting that the building to its south is coming to TEYCC on June 30.

From the cover letter submitted, more like a technical response to ECS. &
Their land contribution to the E-W new road.
As well, Sherbourne Triangle land is quite complex, CITY wants to widen Lower Sherbourne into two-way traffic and corner rounding are being made to connect E-W new road.

This was what I was afraid may happen: 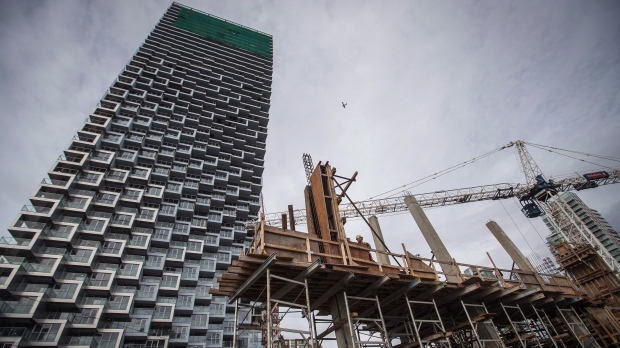 Developers could cancel the construction of approximately 5,000 new condominium units in Toronto in response to rising material and labour costs, an analysis conducted by the real-estate research firm Urbanation has found.

Has there ever been a condo in TO that's been this delayed, and has NOT been cancelled? Please, I'd love to know.
W

TheSix said:
Not may, when.

Has there ever been a condo in TO that's been this delayed, and has NOT been cancelled? Please, I'd love to know.
Click to expand...

I believe this building is 3-4 years delayed, if it starts today.
W

WeirdFishes said:
I believe this building is 3-4 years delayed, if it starts today.
Click to expand...

Building B2's occupancy date was in 2022, according to APS

Whistleblower said:
Building B2's occupancy date was in 2022, according to APS

Lol, exactly. This feels like a new record. Project is def likely to be cancelled at this point.

This project ain't happening at this point.

Blixtein said:
This project ain't happening at this point.
Click to expand...