This city endlessly exhausts me.

The motto for Toronto should be:

^ People are those who don't want to pay money (i.e. accept higher taxes to pay for transit).

Not like the city hall is filled with chests of gold, that the mayor could use to help the people but prefers to keep intact ..
A

AlvinofDiaspar said:
So this is what we got for pressing "reset"? What a waste of time, money and resources for stupid gameplaying. Whoever demanded this reset should be reset.

It's city council, that's their MO.

To be fair though, it's city staff who come back with these ridiculous proposals in the first place since city council always wants to look for the cheapest available options. When council gets the options presented to them, 99% of the time they defer and send it back to city staff for "more study". Once the immense amount of studying has been completed, the silly options (most times) get eliminated and the more realistic options stay on the table.

We've seen the same thing take place with with the Crosstown West LRT, Scarbourough LRT/Subway, Downtown Relief Line, Gardiner Expressway East and dozens of other projects across the city.

In this particular case with the Waterfront Reset study, the blame should be placed directly on Tory who supported this ridiculous time wasting exercise in the first place. The TTC already had plans in place for a Queen's Quay East LRT, expanded Union Station platforms, and a Waterfront West LRT. Why we had to go down this road again is really beyond me.
S

I think there might be a much easier option in the offing: When the GO bus station is moved south of the tracks, the present one becomes available. Run the westbound cars north on Bay, on the surface, loop into the present GO bus station, unload, load, then south on Yonge and turn east on QQ,

Simple and somewhat cumbersome? Absolutely, it might need priority at some turns, but QQ already has that 'imposition'. Dirt cheap and simple to build? You betcha, and no excuses not to build it soon, and absolutely no reason to close the present QQ West/Union loop to do anything. Those wishing to run through east-west on QQ can transfer at corner of Bay/QQ. Only serious downside would be traffic on Bay north at morning peak, and Yonge south evening peak. So future considerations could be considered to alleviate that.

The beauty of doing a surface loop would be to get the route up and running as soon as possible, and relatively cheaply. Improvements can come later. The present Union GO bus platforms and connections are too valuable to waste. And they're already built.

How much traffic could this handle? Think Dundas West station, except with much more room and superb connections in comparison. A pedestrian tunnel from the present GO Bus Terminal to TTC Union Station would be needed, a very modest challenge compared to all the ideas I've seen previously.
Last edited: Mar 3, 2019
N

steveintoronto said:
I think there might be a much easier option in the offing: When the GO bus station is moved south of the tracks, the present one becomes available.
Click to expand...

The renderings I saw showed a skyscraper on much if not all of the present one.

Is that part of the project cancelled? I though that an incentive that the developer had, developing the existing station after it's moved.
S

nfitz said:
The renderings I saw showed a skyscraper on much if not all of the present one.

Is that part of the project cancelled? I though that an incentive that the developer had, developing the existing station after it's moved.
Click to expand...

I'm pretty sure the approved plans don't include a bus terminal!
S

nfitz said:
I'm pretty sure the approved plans don't include a bus terminal!
Click to expand...

Well in that case, loop it through the new GO Bus Station on the south side. Concept stands, and even better. 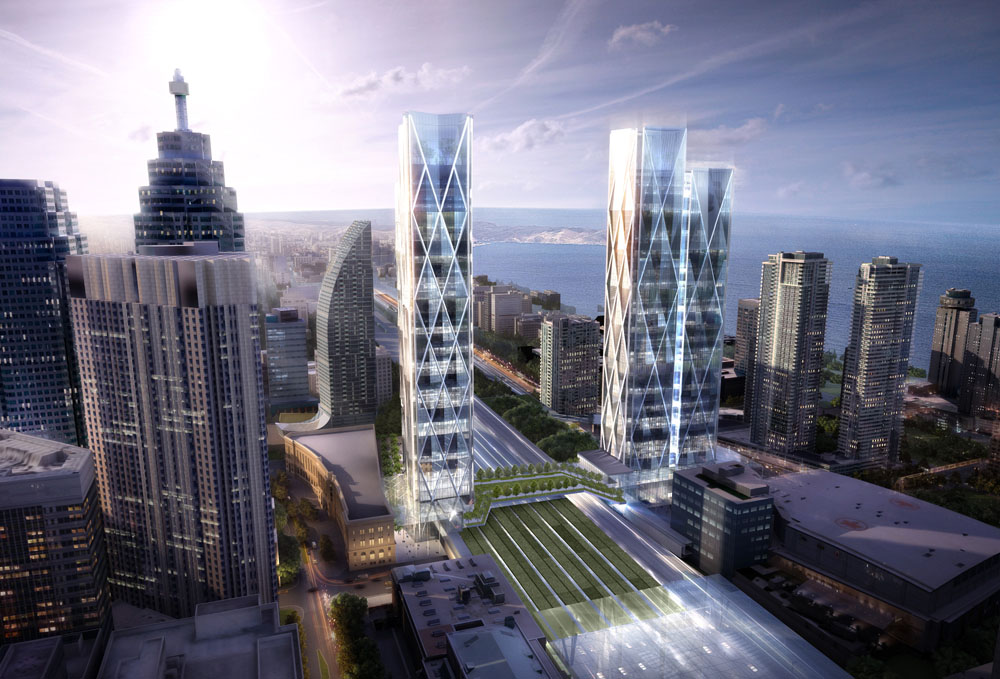 Ivanhoé Cambridge and Metrolinx have officially announced what UrbanToronto leaked back in August, that a new Bus Terminal would be built at 45 Bay Street, integrated with a dramatic new office complex for Downtown Toronto.

steveintoronto said:
Well in that case, loop it through the new GO Bus Station on the south side. Concept stands, and even better.
Click to expand...

You might want to read more about this project. I saw a good summary on a website the other day - http://urbantoronto.ca/news/2019/03/cibc-squares-ascent-continues-near-union-station
S

[...]
The terminal will have improved access to Toronto’s Union Station, TTC, VIA Rail and UP Express. It will also have 14 bus bays – that’s twice as large as the current station.

It’s an important project when you consider GO Transit currently runs on average 485 bus trips every weekday out of the current Union Station Bus Terminal, transporting around 13,600 daily weekday riders. [...]
Click to expand...

The new, state of the art Union Station Bus Terminal is set to bring an improved customer experience, safety and connections to Union Station and the surrounding area. For a city used to seeing ico…

The current crop of city council politicians keep deferring, deferring, and deferring. Never getting anything going under the guise of "saving money".
[SIGPIC][/SIGPIC]W. K. Lis
S

raptor said:
This APM infutiates me so much. The city is going out of their way to eliminate the transfer at Kennedy for the good people of Scarborough, but have no issues ADDING a transfer on Queens Quay. If all this is just an attempt to justify a proper streetcar loop rebuild at Union, then fine; otherwise, it's a travesty. Damn penny pinchers.
Click to expand...

I'm not sure what the issue is here. Another NIMBY expecting a transfer-free trip through the city? Funny how you're allowed to be infuriated about things which affect you (but are in the city's best interest), but others can't be remotely curious about things that affect them. Seems a little hypocritical, don't you think?

Did anyone go to last night meeting, as I want to hear any fees back before post my review????
Due Time restriction, visit my site https://www.flickr.com/photos/drum118/ to see updated photos of projects shot the last few weeks since I don't have the time to post them to various threads.
See my videos on YouTube https://www.youtube.com/user/Transitdrum118
S