The city is currently in the process of replacing the 102-year-old Walterdale Bridge. The new bridge features a pair of 56m tall steel arches below which the bridge deck will be suspended.

The old bridge will be demolished once the new bridge is complete.

This Sunday was "the big float" wherein the central arch was loaded onto a pair of barges, and pulled upstream into position where it will be lifted onto the support towers for assembly (see above video for reference).

I am fortunate to have been able to witness and capture the event from multiple angles. I have to say, it was one of the most incredible things I've ever witnessed in my life.

The images offering larger size links are all stitched images between 60 and 110 megapickles. Click them for some insane detail. 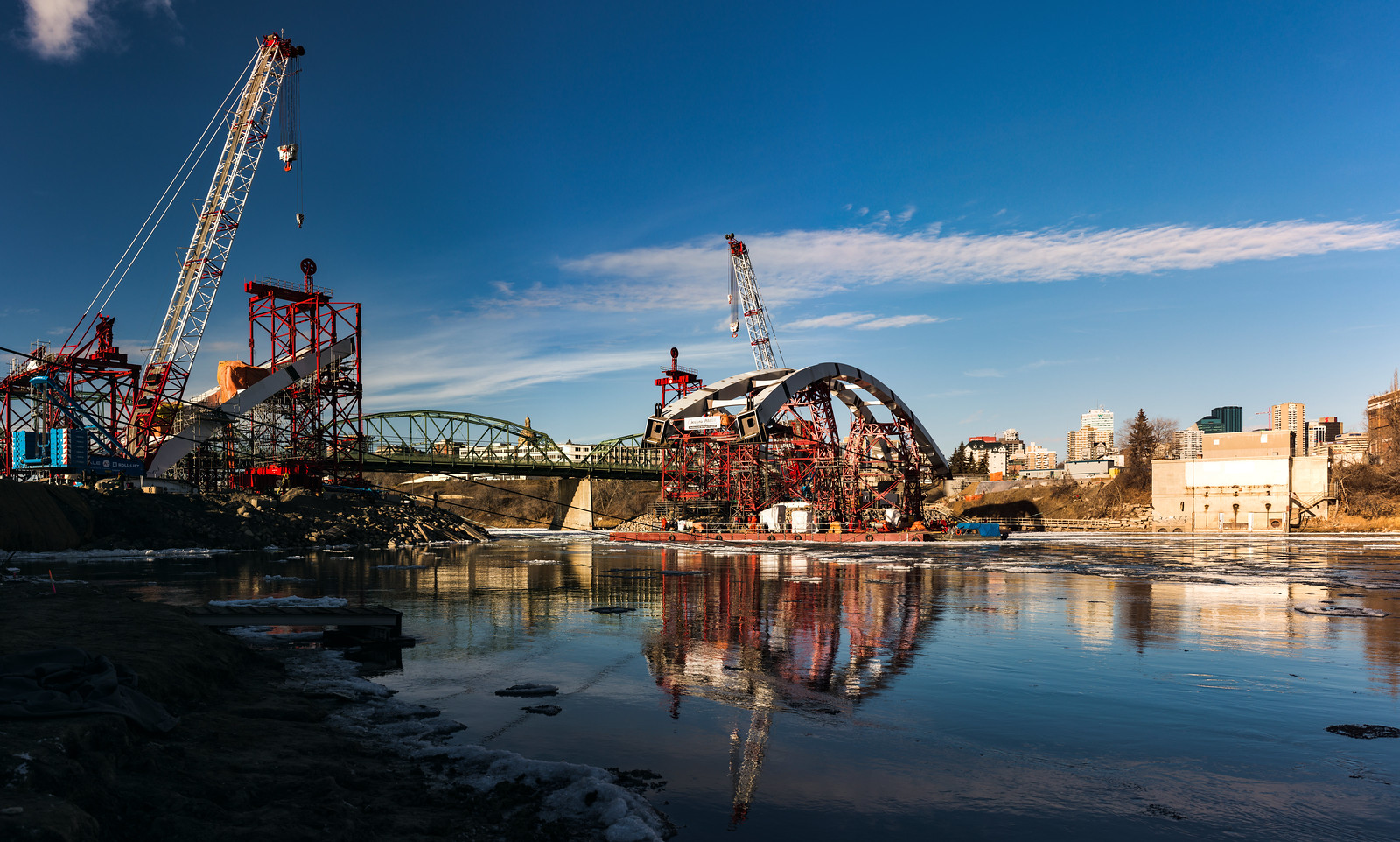 (You gotta be kidding me Size)

(What were you thinking Size, sorry for the bad artifacts in this one)

(This one's not so bad actually Size) 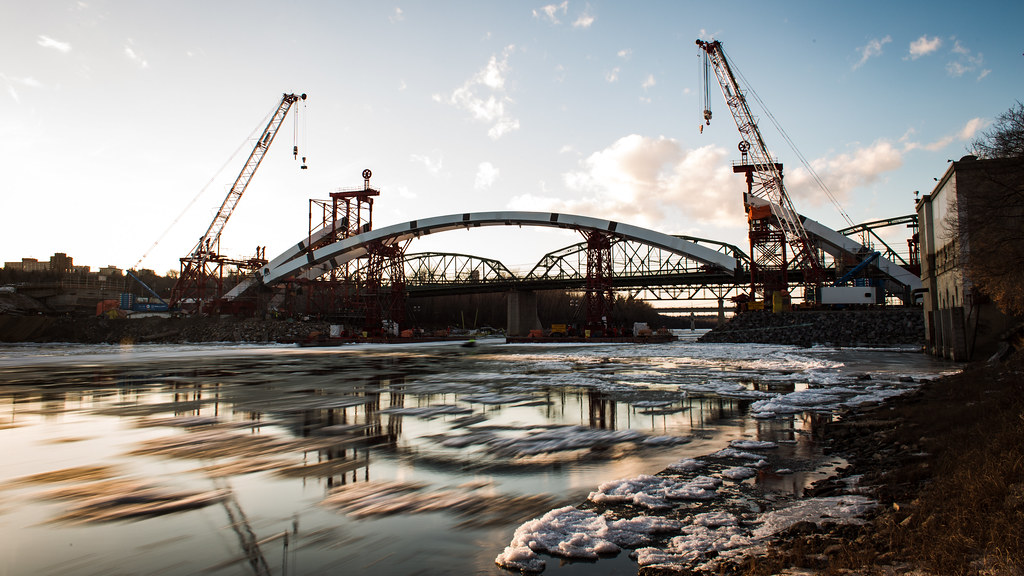 It actually reminds me of the Humber Bay Arch Bridge in Toronto: 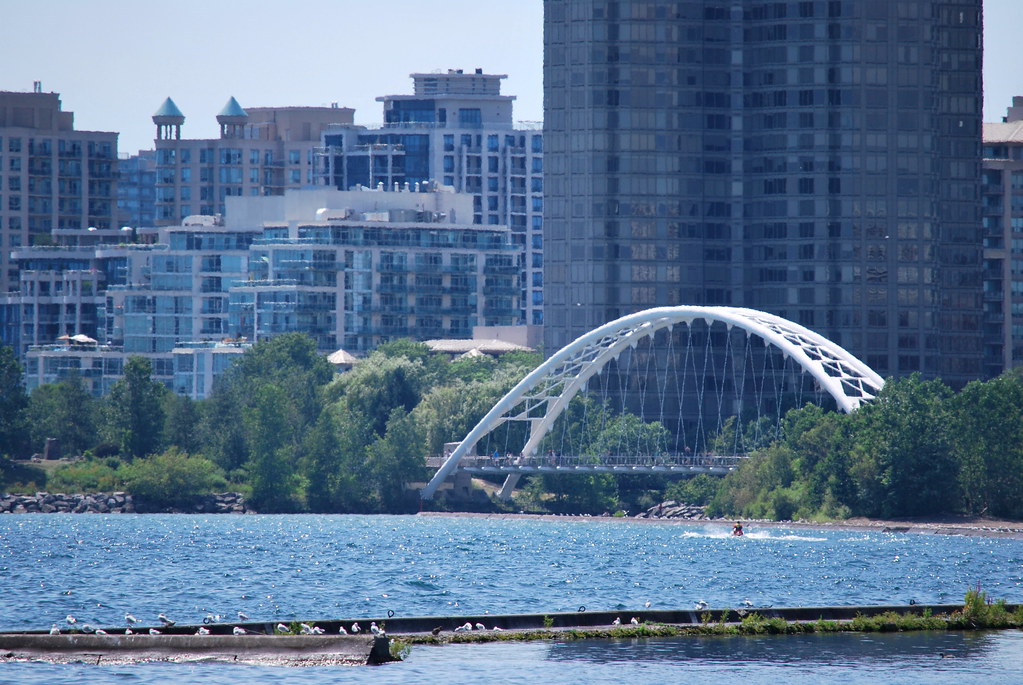 Jan 19 - The 950-tonne central arch span is now being lifted onto the next segments. The lift will take 6 hours to complete. Awesome pictures, @Daveography ! It's fascinating to see this bridge being assembled.

Later in the day. Arch is in position. Walterdale Bridge multi-use trail to open in 2017, well after bridge opens to traffic

Cars will be traveling across the Walterdale Bridge this fall, but pedestrians and cyclists will have to wait until 2017 before receiving the access they were promised.

The city completed a major lift of two steel arches for the new bridge Tuesday. The bridge was initially scheduled to open last fall, but steel for the project being fabricated in South Korea was delayed.

While the components for the main part of the bridge are here and being moved into place, pieces for the multi-purpose trail on the east side of the bridge still haven’t left South Korea, according to the city.

Walterdale Bridge compromised by substandard work and materials, lawsuit alleges
The company under a contract with the City of Edmonton to replace the Walterdale Bridge has used substandard work and materials in its construction, resulting in deficiencies that will compromise the bridge's lifespan and strength and require costly repairs, a lawsuit claims.

In its statement of claim, subcontractor Capitol Steel Corporation alleges negligence by the city's contractor, Acciona/Pacer Joint Venture (APJV), that is due to an attempt by APJV to make up time on the bridge's construction, which is a year behind schedule.

"The demands by APJV to implement improper, substandard and deficient repair procedures (or no repairs at all) were intended to and would result in the acceleration of the completion of the project, but at significant detriment to the strength and long-term viability of the structure," the lawsuit claims.

City confident in the quality of Walterdale Bridge after lawsuit alleges welding problems
A lawsuit filed recently over the delayed Walterdale Bridge alleges shortcuts and poorly-repaired steel defects could be bad enough to compromise its strength over the long term.

But City of Edmonton officials say their third-party engineers are ensuring Edmonton gets what it pays for and that they are confident in the safety and quality of the bridge.

Barry Belcourt, Edmonton’s manager of road design and construction, said his team is aware of the lawsuit but confident in the quality of the bridge. They have a third-party, ISL Engineering, on site to monitor the work, and that includes documenting every weld and the X-rays used for quality control, each steel deficiency and how it’s been corrected.

“They’re our eyes and ears on site,” he said. “It’s the most rigorous quality control process we’ve ever put in place.”

Deficiencies are normal for a project of this magnitude, he said. What’s important is that they are caught and corrected. “At the end of the day, allegations are allegations. … They are common place in industry. We’re not caught off guard by this,” he said, adding that the city doesn’t get involved in disputes between a prime contractor and subcontractors.
Click to expand...

Second lift is happening today; unfortunately I stopped receiving the media notices by email so I didn't know and will miss the media scrum today I'll drop by for photos later at least.
SkyriseEdmonton | Daveography.ca | Flickr | Facebook | Twitter

Second lift of the now-2,000-tonne arch. Talking to one of the engineers who was nearby, apparently all of the falsework and equipment used to support and lift the arches came from Spain, as did the workers performing the lift. 'It's a pretty big day' as final arch for new Walterdale Bridge rises in Edmonton's river valley
Edmonton’s river valley has been crowned with a new bridge and a signature look.

More than eight hours later, the arch had been raised 20 metres to its final height of 54 metres above the river — a giant white bow towering over the old Walterdale Bridge it’s replacing and about the same height as the High Level Bridge to the west.

The uppermost arch and the base arch pieces will be welded together using 8,000 pounds of welding material.

The feat is both an engineering marvel and a historic occasion, said Ryan Teplitsky, the City of Edmonton’s construction project manager overseeing the project.

“It will become a permanent landmark of our city for generations,” he said. “It’s a pretty big day.”
Click to expand...