The developer behind a proposed $400-million, 65-storey, five-star hotel and condominium complex on University Avenue will also partly restore a dilapidated 19th-century building on the site that was one of the city's early hotels and housed a long well-known beer parlour.

A committee of local city councillors approved the plans without debate yesterday, forwarding the project to council this month despite opposition from a group of historians, architects and hotel-worker union activists.

They say the plans from Vancouver-based Westbank Projects Corp. and architect James Cheng will do too little to honour the history of the boarded-up building at Simcoe and Adelaide Streets known as Bishop's Block, which dates back to the 1830s.

But Westbank's plans for a 214-metre tower, approved by city planning staff and the city's preservation board, will restore the two outer facing walls of Bishop's Block to their late 19th-century appearance and keep the building as a free-standing structure on the hotel site.

If approved, construction would start in the summer of 2007.

Craig Heron, a York University history professor who addressed the committee yesterday, said he was disappointed after councillors refused to consider forcing the developer to do more to restore the building's interior.

So is BA, cross-posted here:

Fantastic news on both! The stars must have been in alignment yesterday.....
M

there was a small picture in the print version... is that available somewhere else too?
A

There is a huge version of the rendering in the appendix of the community council report: 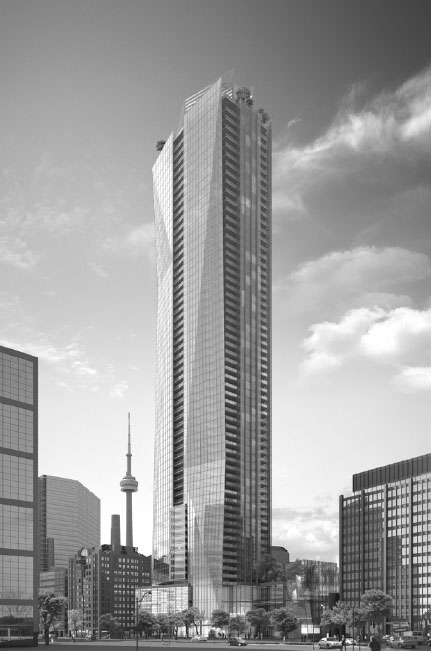 Excellent news- that lot has been an eyesore for way too long already. Too bad they had to spend extra cash to keep that derelict old ruin on the corner though :smokin
I

Re: Shangri-La approved by Community Council

Anyone know the date when the City Council will vote on it "this month"?
S

Very happy! I am glad they are fixing up the Inn too . Part of our charm is the oldies.
J

Finally the skyline will be filled in nicely when coming in from the west. The gap north of Scotia Tower was just waiting to be filled in.
2

Finally the skyline will be filled in nicely when coming in from the west. The gap north of Scotia Tower was just waiting to be filled in.

This is wonderful news. This, in combination with the Opera House, will really light up that troubled little stretch of University.
If there's one downtown street that can handle this kind of height and density without blinking, it's University Avenue. Personally, I'd be for a vast unified increase in height up the entire length of it - From Adelaide to College.
C

^ Me too but I guess it's a little bit late for that now, isn't it? I can't think of any other properties available along University between Front right up to College.
A

I am amazed that they have not secured the rights for Shangri-La hotels yet. I hope this will not be an issue holding anything up.

Hoping not to sound too negitive, but with declining American tourists, a high dollar and the passport issue probably keeping even more Americans away in the future, can our city take on another 5 star hotel with the Rtiz, Four Seasons and Trump (cough) opening up. Will Shangri-La take the plunge. Can they rely on their asian market? Is the high-end asian market travelling to the city in good numbers?
You must log in or register to post here.
Share:
Facebook Twitter Reddit Pinterest Tumblr WhatsApp Email Share Link