Opinion: Even Canadians fear US democracy could end soon

From an author's book to a political scientist's warning, these are sobering reminders that if our democratic Republic ends it will have repercussions not just for our nation but the world, Dean Obeidallah writes.

I read that there are an estimated 6 million Canadians who support/agree/sympathize with Donald Trump or his beliefs. Similar demographics to his base in the U.S. .. male, white, not well educated and mostly live outside major cities.
Click to expand...

Not saying you're wrong, but we should be very careful when citing information. Misquotes or misinformation can snowball quite quickly.

FriendlyDrunks said:
Not saying you're wrong, but we should be very careful when citing information. Misquotes or misinformation can snowball quite quickly.
Click to expand...

There was a poll taken by Ipsos in Canada prior to the election. The Globe & Mail published this column last week which echoes the poll. 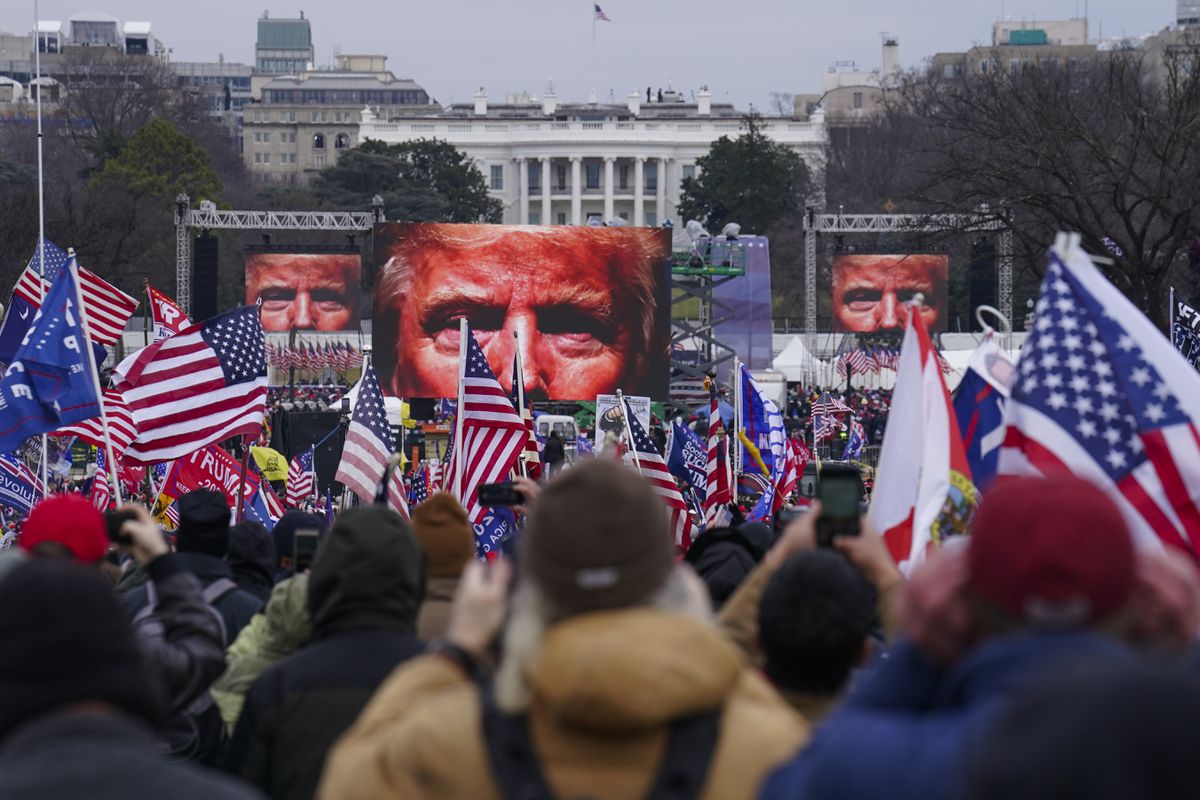 Opinion: The disturbing reality is that millions of Canadians support Trump

The Trump appeal lies primarily in the Prairie provinces. Among the many reasons for his support is his ransacking of political correctness.

peopletalking said:
We should start a pool on when we think the US will collapse. I say no later than 2028.
Click to expand...

Collapse is a matter of degrees.

Compared to European countries, some which have went up to 3 years without a budget, the USA has been operating outside its normal budget process since 2007-08. The Democrats delaying the last George Bush Budget ended up being the first step of tit-for-tats that eventually led to today's near total legislative gridlock.

It is like Star Wars, will we get Democracy collapsing to thunderous applause, or "I am the Senate".

Don't forget how many Trump flags are at protest rallies here, if the US democracy falls, ours is probably next. The whole Wexit movement was to leave Canada and join the US so we could have Trump as our ruler too.

Jamelle Bouie (NY Times) has made a good point about what the "collapse" of American democracy might look like. He cautions against looking to movies, interwar Germany, or the fall of the ancient Roman republic. Instead, he says that you can look at the USA prior to the civil rights movement. At least at the sub-national level, it was the norm that elites entrenched themselves in systems of semi-authoritarian one-party rule. In the South, you had the complete control of the Dixiecrats, backed by violence and Jim Crow repression. In the North, you had big city political machines. Even though presidential elections were typically competitive, the two candidates were basically chosen in private by the local-level elites.

Even today, look at how many states have one-party rule. Illinois has literally had the same Democratic house speaker (Michael Madigan) for almost 40 years!! But at least in Illinois the Democrat's dominance has been backed by popular majorities in elections. In "swing" states like Wisconsin, Pennsylvania, Michigan, and North Carolina, the Republican Party can essentially never be removed from power. Even when they lose the popular vote by a lot, they still hold huge majorities in the legislature. When Democrats win the governorship, the legislature just strips the governor of power.

Based on what happened in 2020, a plausible end point is that Republican-controlled state legislatures start routinely overruling any election they lose, and the Republican-controlled SCOTUS refuses to block the power grab. Republicans typically control around 30/50 state legislatures, which would allow them to perpetually dominate the Presidential electoral college and the US Senate. You'd have a situation where a minority of the US population, living in the poorest states, held complete political domination over the majority of the US population living in the wealthiest states.

Add to this mix of Republican skullduggery at the state level, a demagogue/autocrat/populist like Trump, and you have a picture emerging that is more like Nazi Germany. Trump is the catalyst behind all of these anti-democratic actions at the state level. He is the one that is encouraging or coercing Republicans to do anything to win ... unconstitutional, illegal, immoral, irresponsible ... it doesn't matter.
Principled Republicans in congress are going to regret that they did not have the courage (a few did) to impeach Trump the second time. His base would've slowly dissipated as he would no longer be a voice in the party. The world would have been been rid of him by now. If the Republicans take the house & senate in 2022 (very likely) and Trump runs in 2024 by stoking fear and division with lies ..... again.... then the dominoes all fall into place.

An anecdote from a friend in the USA came to be of greater relevance to me around voter ID laws. It is around that even in Democrat states, the ability to get ID is via the DMV, and the DMVs are notoriously poorly run. Like wait 3, 4 hours poorly run to try to register a vehicle.

I thought the DMV was just a popular culture trope, but it is the reality. Most states cannot even run that most basic of government administration in a consumer focused way.

Now I see it as just another layer in the machine to try to keep people outside of the registered electorate.

There has been a lack of professional sports to watch in the last week or so with the pause in hockey and football. So turning to one of the best spectator sports around .. American politics ... I recap what we have learned in recent weeks.
- Trump and his followers persuaded Republicans in swing states to 'fake' electoral ballots that could be used in place of the real ones. The fake ones of course, declared Trump the winner of the election. These were all ready to go if Mike Pence would have rejected the legitimate ballots
- Trump wanted either the Departments of Defense, Justice or Homeland Security to seize voting machines in swing states under the pretense that the machines were rigged against Trump. No proof of course ... just conjecture. After Attorney General Barr decided he would not go along with it and publicly stated the election was won 'fair & square', Trump went as far as drafting an order to the other two departments. After back channel probes, he decided not to issue it
- A District Attorney in Georgia is investigating Trumps attempts to bully/cajole the Secretary of State regarding the vote count ....after all of the recounts proved it was legit. Again, what everyone heard on a recorded phone call is not really a 'smoking gun'....just harmless interference by a sitting president! I have no doubt that Trump made similar calls to the other swing states attempting to interfere .. it is just that they were not recorded or the discussion was not repeated to anyone
- Mike Pence finally went on record and stated that Trump was wrong about January 6. Not he or anyone in government has the authority to overturn the results of the election. Trump of courses disagrees and most prominent Republican officials and high ranking politicians do not have the courage to back Mike Pence, when they are questioned who is right
- The Republican National Committee called the events of January 6... 'legitimate political discourse' and censured (with no one on the committee or in attendance, objecting) Cheney and Kinzinger for participating in the Jan 6 investigation. I guess the RNC thinks that what everyone around the world saw with their own eyes was not really what happened
All of the events leading up to the violence of January 6 just screams a carefully planned coup attempt.... that failed. This could not have happened at any other time in American history without some swift justice being applied. Yet, here we are over a year later and the wannabe despot, Trump, acts like everything he did was perfectly fine and justified ... after all .... he was cheated out of winning.
Last edited: Feb 9, 2022

The US could become a scary place if Trump runs again. Here's hoping he has a stroke or something before then!

It's weird. Most of my life I thought the U.S. was the example of democracy, same thinking and as stable as they came. Now I worry sometimes that if Trump ever got back in, the country could go south quickly. The U.S. could be one of those unstable crazy countries I used to watch on the news.

From a radio interview yesterday.....remember this is a former president who still wants to be president .... talking like this:

"I went in yesterday and there was a television screen, and I said, 'This is genius.' Putin declares a big portion of the Ukraine, of Ukraine, Putin declares it as independent. Oh, that's wonderful,"
The ex-President added: "So Putin is now saying, 'It's independent,' a large section of Ukraine. I said, 'How smart is that?' And he's going to go in and be a peacekeeper. That's the strongest peace force," Trump said. "We could use that on our southern border. That's the strongest peace force I've ever seen. ... Here's a guy who's very savvy. ... I know him very well. Very, very well."

Aside from the fact that it is Trump's favourite way of communicating using 'word salad'. The point he is making does not even make sense. Arbitrarily invading another country is genius??? Having the 'strongest peace force' (later also referenced the tanks being used ... he seemed to like this) on the southern border of the U.S.??? For what... to invade Mexico like Russia is doing in Ukraine or to keep out unarmed immigrants from entering the U.S???