Mustapha said:
I don't remember there being any sort of "Save the House of Industry Facade" movement in either instance.

Which means that this facade is a sort of self perpetuating "Heritage" element (can't call it a building, can we?) that no developer has the nerve to raze.

In any event, it seems even more out of place this time around.
Click to expand...

Actually, in the earlier instance, I believe there *was* pressure from the city's historical authority/community--both for its history and for being an important part of William Thomas's oeuvre...
H

Lone Primate said:
Oh, I think service vehicles can still access it and use it, and from what I've seen the times I've been there, routinely do... I meant a something still in use by the average guy trying to drive around town. We're fortunate they didn't bother to remove it, because other superseded bridges have gone by the boards... Lawrence at the East Don and old old Albion Road (Flindon Road) bridge spring to mind. Oh, and as previously mentioned by someone else, Old Dundas Street bridge on the Humber. I'd prefer they left things like that and simply closed them to vehicles but left them open to pedestrians, like they have with Old Cummer Avenue bridge and the newer old Albion Road bridge.

But yeah, old Bayview bridge is part of the campus and is routinely fenced off along the end of Lawrence. The last time I was there I actually had to climb down the bank and wade down the river to get to it; it was the easist way! But it looks like people up on the heights use it to exercise Fido so I wouldn't be surprised if by now someone has engineered another ad hoc access, bending a link in the fence here and there.

Taken from the Don, facing west (towards the new bridge); infrared four-photo pano assembled by AutoStitch and tinted in Photoshop in post-processing. Hoping this spring to take a shot matching one taken by Ted Chirnside in the 1950s from than bank just to my right in this view. You can easily see this bridge, by the way, from east side of the current Bayview Avenue bridge north of Lawrence in the winter when the foliage doesn't disrupt the view: 
One thing I keep wondering is how this bridge survived Hurricane Hazel. Hazel washed out the Don River bridges on Bathurst, Sheppard and Yonge, but this one survived.
A

Mustapha said:
Thanks adma and 'booty'.

Hee-eey ... there boys and girls. Have a puff on Mustapha's 'back-in-time' ciggy and be maaaaa-gicallly transported to the northeast corner of Spadina and Dundas circa 1969.

I just noticed that next to the Shopsy's there's a "Liquor Control Board of Ontario". Lol! Obviously before they rebranded themselves as LCBO. When did this area become Chinatown?

I'm more familiar with the ravine that runs through Alexander Muir gardens, under Mount Pleasant, through Blythwood Ravine Park, through Sherwood Park and Sunnydene park to Bayview (for about 18 months I had the excellent fortune to commute, on my mountain bike, through those ravines, then through Sunnybrook Hospital and down the Don River to work at IBM where Celestica is now).

But back almost to Yonge St. - I posted this photo of the Lawrence Park Appartments to my photoblog: 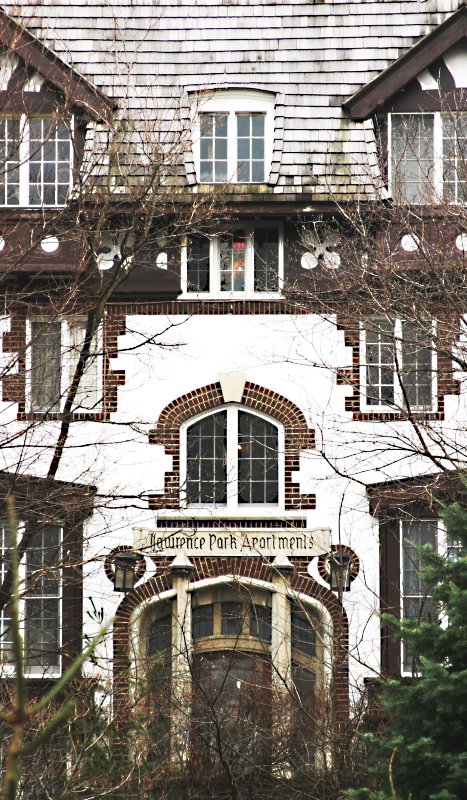 And got a fascinating e-mail, from 'Art':

He sent me a couple of scans from the notebook, but then we lost touch: 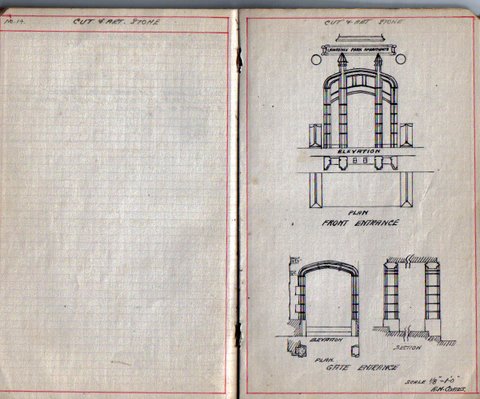 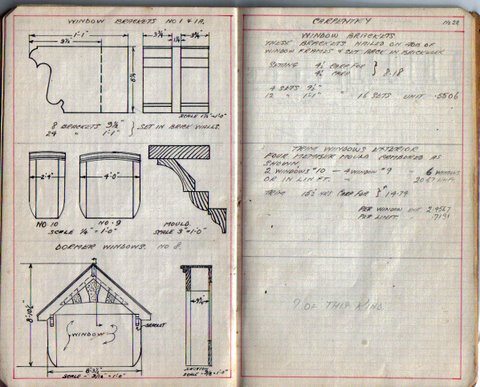 That would be Stephen B. Coon & Sons who designed other Toronto apartment buildings, as well as Stollery's at Yonge and Bloor, and the Dominion Trust Company Building...


So many fascinating connections just waiting to be made...
Click to expand...


Hope this isn't too late.

I received this wonderful picture today from UTer oldcamera.

"And speaking of the Lawrence Park Apts, I've attached a Telegram news photo from (I think) 1938 of my dad's cub pack. (He grew up on St Clements Ave and is pictured seventh from left) In the background is the Lawrence Park Apts. This was before the park at St Edmunds was created hence all the trees."

The view today is unchanged.

The gravel in the foreground is probably the property of the gas station that has been pictured in a Toronto Archive picture of 1945. It's still a gas station today.

In the right distance - up the hill - the awninged building survives. It is now the Glen Grove Suites hotel. It was an apartment building up until - I'm guessing here - 1990 or so. It has some great Art Deco details in gold and green on the outside.


edit. I'm lying. Modern cars look quite different from the ones in the old photo.
Last edited: Feb 5, 2011
A

DTowner said:
I just noticed that next to the Shopsy's there's a "Liquor Control Board of Ontario". Lol! Obviously before they rebranded themselves as LCBO.
Click to expand...

Like CIBC, LCBO's acronym only became definitive around the 80s/90s...

Oh, and re the Royal York photo: it would have been around the end of the 20s--no Bank of Commerce yet. (And you can see the skeleton of Canada Permanent rising behind the Star.)

It's so sad to see the Royal York all tucked away
Click to expand...


Ooy, the price of progress.

DTowner said:
When did this area become Chinatown?
Click to expand...


Asked my wife this today. She grew up on Beverly and then Sullivan in the 60s and early 70s. Went to Ogden and Lord Lansdowne schools.

*The first or perhaps second Chinese restaurant on Spadina was Kom Jug Yuen around 1970 she thinks. It's still there. The owner appears to be the original; I'm not a regular, perhaps someone reading this can ask him and let us know. If so, he is the "Original Pioneer".

*The glazed white brick block of stores on the SE corner of Dundas and Huron was purpose built by Chinese Canadian capital for Chinese businesses. Around 1970.

*The surrounding streets - Huron, Grange, Beverly, etc. etc., were densely populated by the wave of Chinese immigrants - the group that came in 1949 and a few years after. In the 50s and 60s, many of the young immigrant women would wear pajamas on warmer nights while on their porches and making social calls. This community obviously set the stage for Chinese businesses on Spadina and Dundas. The wave of Hong Kong Chinese immigrants in the late 60s was the next and major reason for Chinatown growth. The Elizabeth street Chinatown was in decline as soon as the New City Hall broke ground [expropriations]. The Holiday Inn (now a U of T student residence) finished it off.

*The Missus remembers night time strolls on Spadina with her dad - she said it was very quiet as the factory workers had gone home.


It would be the height of City of Toronto centrism to not mention that numerous other Chinatowns in the GTA have added their histories too.

I remember an unbelievable conversation with my grandfather when I was a boy - he told me about the Chinatown that used to exist prior to the Elizabeth street one. That first one was on York street. I have to go to the Toronto Archives in person someday and see if any pictures exist. There is nothing online anywhere.
Last edited: Feb 5, 2011

thanks to oldcamera's and Aladone's strenuous efforts, I'm going to take the night off. Back to Daily Addition tomorrow around midnight.

Mustapha said:
What a fascinating correspondence!

The Lawrence Park Apartments to me represent the best - perhaps a simplistic, romantic, idealized "best" - of the old way of apartment living in pre-highrise, pre-condo Toronto.

I envision "Flappers" as tenants in the 1920s adjusting their bob hair-doos, hats and dresses as they run out the front door to catch the Peter Witt streetcar to work downtown.
Click to expand...

There are also many wonderful examples downtown on side-streets of early multi-unit buildings that replaced single family homes, inserted seamlessly into the neighbourhood:

adma said:
Like CIBC, LCBO's acronym only became definitive around the 80s/90s...

Oh, and re the Royal York photo: it would have been around the end of the 20s--no Bank of Commerce yet. (And you can see the skeleton of Canada Permanent rising behind the Star.)
Click to expand...

thecharioteer said:
There are also many wonderful examples downtown on side-streets of early multi-unit buildings that replaced single family homes, inserted seamlessly into the neighbourhood:

Further up Yonge, between Breadalbane and Grosvenor, there is still an old fashioned jewellery store like the one in our Then picture. Fidea has been trading for over 80 years.

thecharioteer said:
There are also many wonderful examples downtown on side-streets of early multi-unit buildings that replaced single family homes, inserted seamlessly into the neighbourhood:

That's something important to point out. The density was raised without destroying the character of the street. In fact, it probably enhanced the character.
D