WislaHD said:
@BurlOak I treat your posts seriously because you often make good points when it comes to other issues like transit. But reading the above, I find it hard to believe you are not just the PC party talking piece partisingly parroting dear leader.
Click to expand...

Parody meets Rabid Parrot. I'd think he's way out there, until glancing at the TorStun and realizing his Parrot is flocked.
S

jje1000 said:
Too early to say. For all that matters they can frontload the politically costly stuff at the start of the term, and kiss up to the populace in 2022 (when all of the visceral anger fades into a vague discomfort)
Click to expand...

Or push Ford out front as the battering ram, and then send the diplomatic corps after...after disposing of Ford on a massive bonfire. 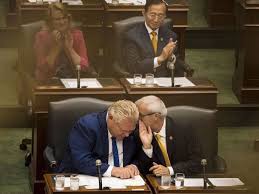 steveintoronto said:
Or push Ford out front as the battering ram, and then send the diplomatic corps after...after disposing of Ford on a massive bonfire.

More political maneuvering being done. Still fascinating that the Liberals left the political system without reform and so ripe for such a rapid takeover, (Weimar Ontario?) :

As the Ontario Legislature ended a Saturday sitting without passing controversial legislation on the size of Toronto city council, Premier Doug Ford's government is also making changes that will weaken the opposition's ability to slow down bills.
Click to expand...

The PCs are moving to change the legislature's rules of procedure, formally called the standing orders. These rules control such things as when bills can be introduced, when opposition parties get to put forward motions, and how much debate must take place before a bill goes to a final vote.
Click to expand...

The PCs proposed the changes this week. A simple majority vote of the legislature is needed to approve them, which means they are certain to take effect.

"This just adds the opportunity for more debate," government House Leader Todd Smith told reporters at Queen's Park. "Obviously we want to get our government legislation passed quickly and this does give us the opportunity without costing taxpayers anything."

Smith said the opposition has used "all kinds of stall tactics" in the Legislature in recent weeks.
Click to expand...

The Tories are changing the rules at Queen’s Park: A 30-year tradition of neutering the Opposition lives on
ANALYSIS: The PCs are not the first party to have discovered that the tools of the Opposition are inconvenient when you’re in government, writes John Michael McGrath
Click to expand...

Kurl: Doug Ford shows Conservative parties aren't what they used to be
Click to expand...

He did so because he believed it, but also because it appealed to his base. Indeed, past Conservative voters are two-to-three times more likely than past Liberal and NDP voters to say the Charter has been “bad” for Canada than they are to say it has been good. Conservatives voters are also the least likely to express confidence in the courts.
Click to expand...

In disagreeing with Justice Edward Belobaba’s decision on his move to cut the size of Toronto city council, Ford is playing to this heightened Conservative skepticism towards Canada’s justice institutions. In moving to invoke Charter Section 33 (the notwithstanding clause), Ford is also betting a figurative flipping of the bird to this country’s legal and government establishment also will resonate among the majority of Canadians, who say they feel as though they are on the outside looking in.
Click to expand...

As bemused as the rest of Canada may be about Ontario – the very centre of the Canadian political universe – now employing a recognized technique aimed at piquing the so-called ruling classes, it is Ford’s nation now. As aghast as former leaders of his old “big blue machine” may be, he knows this is an effective way to tap into the disconnect between this country’s august establishment and its people. Get ready for more.
Click to expand...

[...]
With the Oct. 22 city election hanging in the balance, Premier Doug Ford’s fledgling administration is scrambling.

Smith tried and failed to get unanimous consent Saturday for further debate on Bill 31, the Efficient Local Government Act, and there was not enough time to secure Sunday proceedings in the legislature.

“We’re going to bring the House back at 12:01 a.m. Monday. That way we will be able to begin debate on this bill,” he told reporters after a 46-minute session that saw protesters in the public gallery denouncing Ford.
[...]
Click to expand...

BREAKING: Tories will bring back the House at midnight Sunday (technically 12:01 am Monday) to do second reading debate of Bill 31 - Yup totally legit, maybe they are hoping those pesky protesters will be sleeping and not disrupt their attempt to force their will onto the "folks" of Toronto.

Cowardly Caroline Mulroney is my sister's MPP. Innisfil seems like a nice place though.
Death to Videodrome! Long live the new flesh!

BurlOak said:
It's nice to see Ford working so hard to restore order after that judge tried to throw things into chaos. I think it's too early to start rating Ford among the greatest Premiers in Ontario history - but we shall see. He does have the passion, vision and common sense to perhaps make it there.
Looks like the Legislature will resume sitting on Monday.

Harris reduced the # of MPPs by 30%+. Ford reduced his Executive by 30%+. At least Ford and the PC's have loads of credibility on this issue.
Click to expand...

Evidence that the Kool-Aid bowl is now empty. Videodrome said:
Cowardly Caroline Mulroney is my sister's MPP. Innisfil seems like a nice place though.
Click to expand...

Innisfil's now in Barrie-Innisfil; it's no longer in York-Simcoe.

Thinker said:
Retail politics? As in being a successful businessman or as "pandering to his rich developer friends or those who profit from deals he can provide when privatization starts" While on council he has been admonished several times for conflict of interest and the last I heard Deco isn't doing so great. Thus I can only assume he will cater to his rich friends and make deals that will benefit him, because we all know he's not in it for the people or the derogatory phrase "the little guy".
Click to expand...

How else is Doug going to raise the money to pay Renata and the kids? We know he's run the business into the ground, so Doug actually needs this gig to survive. I can't wait to see how he deals with the lawsuit accusing him of stealing from the widow Ford and his niece and nephew. IIRC someone pointed out up thread that as minors are involved, he won't be able to just pay Renata peanuts to shut her up.
J

The pollster suggesting Ford has no chance of being elected is rather premature.

So it does not mean Ford is unstoppable but I suggest people stop underestimating him as well.
Last edited: Sep 16, 2018
O

Doug Ford‏Verified account@fordnation
The Order in Council for the Ontario Legislature to resume sitting at 12:01am on Monday has been signed. My cabinet colleagues and our caucus are working hard to ensure the timely passage of the Efficient Local Government Act.


Ford looks like a wrestling promoter flanked by two lady lawyers - governing is so easy.

Jasmine18 said:
The pollster suggesting Ford has no chance of being elected is rather premature.

So it does not mean Ford is unstoppable but I suggest people stop underestimating him as well.
Click to expand...

NO one ever underestimated Doug Ford, it was the uninformed, uncaring, and stupid serial conservative voters that got him elected. And yeah blaming those who couldn't get off their arse to vote too.

A letter from the “legal community” to Caroline Mulroney https://sites.google.com/view/respect-our-rights-open-letter/home