NomoreaTorontonian said:
And my husband (an Englishman) insists that ST CLAIR is SINCLAIR--to which I answer that we didn't name major streets after news readers!
Click to expand...

Gordon Sinclair was a ME! ME! ME! type; personal experience.

(Sorry Gordo! To the Victor goes the spoils! LOL.)


Regards,
J T
IF only I had of questioned then, for the answers needed now . . .

That cute house next to the drug store is at 405 Woodbine Ave.
I've been holding this photo for a couple of months with the intention of visiting the site
but you beat me to it. Good work!

We've often looked at comparisons on this thread of old buildings replaced by new buildings. We've seen buildings vanish as streets get widened or linked (Bay/Terauley, Davenport, Dundas). We've seen blocks vanish for new roads (Bay/Terauley, University, Mt. Pleasant). Some of these "ghost" buildings (such as the Princess Theatre which would be in the middle of the King/University intersection) can even be imagined on foggy nights.

One such ghost building wasThe Golden Lion at 33-37 King Street East, which vanished in 1901 when Victoria Street was extended southerly to Colborne (at the time of the construction of the King Edward Hotel). Once one of the premier early department stores in Victorian Toronto, its passing also symbolized the transition of King Street from its Georgian/Victorian scale to the new world of Edwardian "heft" and early skyscrapers (required reading: Patterns of the Past Dundurn Press 1988, chapter titled: "Streetscape and Society: The Changing Built Environment of King Street Toronto" by Gunther Gad and Deryk W. Holdsworth).

1857; The Golden Lion at left before alterations:

From Landmarks of Toronto


I may be missing something painfully obvious, but what's that tall building off in the distance on the horizon (looks like it's south of Front St.)?


Spoonman said:
I may be missing something painfully obvious, but what's that tall building off in the distance on the horizon (looks like it's south of Front St.)?
Click to expand...

When I saw the tower above the building, I thought it may be the old Terminal Warehouse (see thumbnail)
But now I'm not so sure.


Darn, Goldie, my stump the chumps moment lasted only 18 minutes!

I haven't heard that old song since the 80s. Thank you.

From the goods advertised in 1850s Toronto it seems that there was quite the moneyed leisure or at least a substantial moneyed mercantile class.

Optician Potter's "optical, philosophical and mathematical" instruments can only have been directed towards a market of those wanting to express their appreciation for the Sciences to friends by having an orrery or telescope in the parlour.

Could somebody rush to assist us re: Spoonman's question please. C'mon, people... I'm stumped myself. Has that building been demolished?


Inspired by Redroom Studios, here is my video of the Sam The Record Man sign in operation. It only lasts a few seconds.


Among others, the house that presents itself diagonally to the street is still there. They torn down the school at the end of the street.

Woodbridge - Then and Now

Did I ID this right?

In the BlogTO post on Toronto of the 1890s, I think I have ID'd a photo of Queen East. 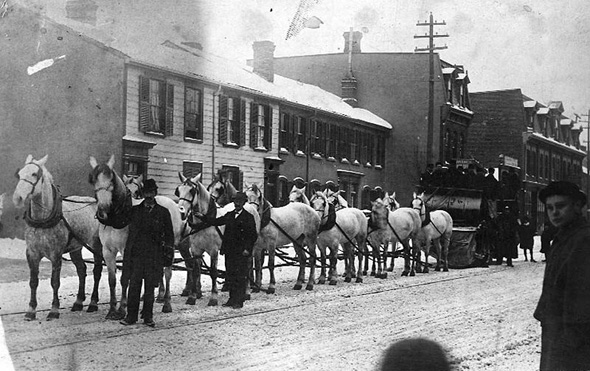 Can't take a photo because I'm not even in Canada anymore. The 2-storey rowhouses are gone, but the 3-storey commercial units remain. Note the gables, mansard, and pattern of 4+1 small/large top floor windows on the rightmost row. While Ontario Paint & Wallpaper continues strong the other retail in these buildings seems to turn over constantly with truly awful shops. Further east, near Queen & Sherbourne, there is more life (the new flower shop EcoStems is a winner, as is well-done vintage shop Upside Dive).
Last edited: Jan 5, 2011
T


Among others, the house that presents itself diagonally to the street is still there. They torn down the school at the end of the street.