ShonTron said:
Agreed: Re: some posts about Ford's wife were totally unnecessary.
Next time will result in suspension from UT.
Click to expand...

I'm afraid I got that ball rolling with my PG post of the NC-17 followup line from the bag-of-hamburger-punch evening. <s>Sorry for that, folks. That's in the past, and I can't change the past. All I can do is move on...</s>
Actually I am sorry, it was a real waste of a couple of pages. Won't happen again.
B

I sent in my complaint to Parks & Rec using THIS protocol. Make sure the subject line reads "Attention: Complaint Handling".

I am writing in response to a recent issue that has come to my attention in regards to an application for the use Thompson Memorial Park for the 2014 "FordFest".

This event is intended as a clear use of public space for a campaign event.

Any suggestion that Mr. Ford is acting as a private citizen and not as mayor when planning for Ford Fest is completely disingenuous. As you make a decision on whether nor not to grant a permit, I am asking that you look into last year's event. What type of event did the permit application show for the Ford Fest in September 2013 in Etobicoke? Was it a "family event"? A "special event open to the public"?

Mr. Ford promoted the event on his Facebook page, "Toronto Mayor Rob Ford,â€ and under his Twitter handle, â€œTOMayorFord.â€ According to an article in the Toronto Star, in a speech at the event, he "urged his supporters to vote, to canvass, and to put up signs". And he said, again, that he is stopping the â€œgravy trainâ€ and keeping taxes low. He gathered contact information from potential voters in exchange for Ford Nation teeshirts. It was a campaign event outside of an election period, which is an issue in and of itself.

I think you must deny the permit based on last year's experience.
S

pattycakes said:
I find your posts difficult to read and they take up extra space.

I wasn't being facetious when I said it was an old habit. I wasn't a graphic designer, I just did some of the workload so to speak.
A long time ago I used to have to put texts into column like arrangements, and after a while it just became a normal way of seeing any text for me.

If you do find it difficult to read it visually however, I can certainly try to adjust it out of courtesy.

casita said:
If MiFo gets in, I wonder if he will vote his own way, or the way RoDoFo tell him?
Click to expand...

RoDoFo don't tell them how to vote. Someone else does that for them. 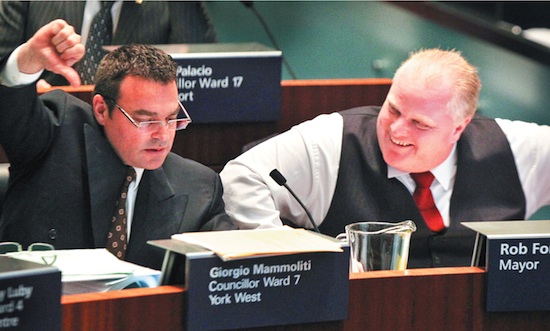 Scarberian said:
If Michael Ford is running for council on his own accord,
he should start speaking up on his own.
RoDoFo can put their money where their big mouths are
if they claim Mikey is his own man, and not just a place holder
candidate.
Click to expand...

As you note, If you look past the toxic Ford brand all you have is a millionaire trust fund baby who has done nothing with his tremendous resources other than put in a few years of college and get a pilot's license. He could have chosen to spend his time as a community activist, as a volunteer or at a low-paying but high-learning job (being your uncle's dial-a-cab doesn't count).

JWBF said:
The latest attempt to remove RFMG by Dougie was at Diane's behest.. but lets just agree to disagree on this point.
Click to expand...

What is this about? What attempt?

EagleEye said:
What is this about? What attempt?
Click to expand...

I gather that Diane visited the mayor's office and ordered Doug to clear out the damn hippies.

sno man said:
I'm afraid I got that ball rolling with my PG post of the NC-17 followup line from the bag-of-hamburger-punch evening. <s>Sorry for that, folks. That's in the past, and I can't change the past. All I can do is move on...</s>
Actually I am sorry, it was a real waste of a couple of pages. Won't happen again.
Click to expand...

Thank you to you and to Shon Tron.
I am sorry for my graphic explanation as well.

Thanks basic. I followed your advice and sent mine to parks and cc'd the others. Here's the body of what I sent:

As a resident and taxpayer of the City of Toronto, I would like to complain about the use of a public park for election campaigning purposes.

Mayor Ford was allowed to hold a Ford Fest in a city park last year and campaigning was done. At the time I assumed it was because an election was not actually in progress, and the rules weren't technically being broken.

This time is different. We are in the midst of a municipal election, and for some reason the Parks Department thinks it's appropriate to issue a permit, for what is clearly a campaign event for the re-election of Mayor Ford.

This constant flouting of the rules as they apply to Mayor Ford must stop. If the permit is issued, I trust that all other candidates can simply ignore the intention of the rules, mislead City Staff about the nature of the event, get their permit and do their campaigning in city parks on the taxpayers dime.

The City of Toronto should not be subsidizing the cost of any candidate's campaign, including Mayor Ford's.

I look forward to your response.

animatronic said:
I gather that Diane visited the mayor's office and ordered Doug to clear out the damn hippies.
Click to expand...

Two weeks, on Saturday July 5th, Doug came in and told the security guard to 'clear those guys out' or words to that effect.
It could be that instance.
it was the same day that lots of people were coming and going out of the mayor's office, and people's cards wouldn't open the doors, which was unusual for a Sat..
Y

newearthling said:
Two weeks, on Saturday July 5th, Doug came in and told the security guard to 'clear those guys out' or words to that effect.
It could be that instance.
it was the same day that lots of people were coming and going out of the mayor's office, and people's cards wouldn't open the doors, which was unusual for a Sat..
Click to expand...

Thanks for the email addresses.

As a tax paying citizen of the City of Toronto, I am deeply concerned about Ford Fest 2014 being held in a city park.

Rob Ford is in the middle of a campaign, plain and simple, and regardless of his so-called reasons for holding an event on city property, it is obvious that such an event will absolutely contribute to his campaign.

Mr. Ford promoted the event on his Facebook page, "Toronto Mayor Rob Ford,â€ and under his Twitter handle, â€œTOMayorFord.â€

Will he sell bobbleheads?

Will he hand out magnets, t-shirts, buttons or any other material related to his current position as Mayor?

Will he be taking down names for his campaign list?

Will he mention at any time, in any way, his position as Mayor or anything he has done (or really not done) for the city?

If the permit is approved, will someone be there to monitor the situation?

If he breaks the rules, will he actually receive any punishment that would actually have real consequences?

When is enough, enough? The striking thing is that he gets away with everything, which of course makes us question City of Toronto's rules and policies and effectiveness at enforcing them.
S

Kelly Girl said:
Nick Kouvalis is a known trickster, so I wound believe word he says, but Andray Domise is a great candidate, never mind the F-Brothers et al. So, thanks to Sweet Lou, I just sent a contribution to his campaign even though that is far from my riding. It is time we have fresh ideas from Etobicoke and from what I've read Domise is that fresh voice.
Click to expand...

Yay! And I just paypalled him $100 about an hour ago. You get back $75 of that. Also nowhere near my latte-drenched riding, but will find out about volunteering.
R

Videodrome said:
Yeah, family background aside, I wouldn't be confident with voting for a college student with no experience.
Click to expand...

I think Giambrone was our youngest councillor; 26 when elected. He's a bit of a special case as he had 10 years experience in politics at that point.

I'm not aware of Michael Ford having done anything in politics outside of his immediate family.